A Chronology of trans persons in modelling and fashion: Part I: to 2000

L.S., a fashion model in Paris, In 1909. Aged 20, she was engaged to be married and was bothered by apparent tumours in her labia majora and attended the Hôpital Beaujon. A biopsy of the tumours resulted in them being identified as testicles. The doctors then decided that she was a 'true male', that is a masculine pseudo hermaphrodite. She was informed that her feminine 'genital aspiration', that is her engagement to her fiancé, was an act of homosexuality.

Michel-Marie Poulian worked as a model in Paris, in addition to painting portraits and doing stained-glass windows for churches.

Charlotte McLeod did modelling in New York and New Orleans. 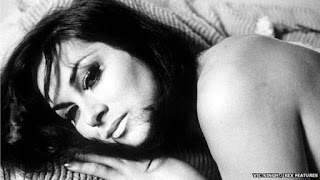 After completion surgery in Casabalanca, April Ashley returned to England, and was able to build a career as a model; clothed, in underwear and nude. This led to a very small part in the film The Road to Hong Kong. Until November 1961 when she was outed in the Sunday People.

A person we know only as ‘Queen Elizabeth’ got a job in Davison’s department store in Atlanta as a model. One day the boss walked in as she was changing and saw her penis. She was immediately fired.

Benjamin’s The Transsexual Phenomenon tells us of Betty/Suzanne who after surgery worked as a fashion model.

Les Lee, performer at Le Carrousel, designed and modelled a collection of women's clothes with some success, such that the models union was able to persuade the French Government to pass a law forbidding female impersonators from working as models.

Georgia Ziadie was working as a model in New York when she met Lord Colin Campbell, married him a week later, and they were divorced the next year. 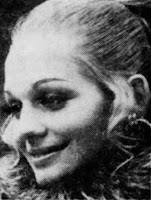 Rachel Harlow, following her lead role in The Queen, 1968, and her subsequent triumph at the Cannes International Film Festival, had become the hostess at a Philadelphia nightclub named with her own name. There were also interviews, endorsements, modeling jobs and television appearances.

Andy Warhol recruited models from the new transy bar Gilded Grape for his Ladies and Gentlemen (The Drag Queen Paintings) series. They were paid $50 and Andy took polaroids. They were not shown as such in the US, but in September 1975 were exhibited in Italy.

Tracy Norman attended a modeling event at the Pierre Hotel in New York in 1975. There she was discovered by renowned photographer Irving Penn and booked for Vogue Italia a few days later. She was quickly featured in major advertising campaigns, Ultra Sheen and Avon Cosmetics. Clairol put her face on their dark-auburn hair dye no 512, launched that year.

After the end of her public affair with John B Kelly, brother of movie-star and princess Grace Kelly, businessman and on the Philadelphia Council, Rachel Harlow dropped out of the night-life business and the gay subculture. She did continue to work as a model in New York, but avoided publicity.

Potassa de la Fayette, model and star on the dance floor at Studio 54.

Robertina Manganaro was a model for the avant-garde artist, Enrico Baj.

Diane Delia worked in New York as a model for Avon Cosmetics.

Lauren Foster had started working as a model in Johannesburg and then Paris regularly in magazines and advertisements. However she was disqualified from the Miss South Africa Pageant. Her big break was in 1980 when she was hired by and was featured Vogue to do a 6-page fashion editorial. She was outed by the tabloid Scope, when another model sold the story, which resulted in ignorant press attention.


Essense Magazine booked Tracy Norman again for several sessions in 1980. During the last session, the hair dresser's assistant, who was from the same part of New Jersey and had been asking around trying to figure out who Tracy was, spoke to the editor, Susan Taylor, who stopped the shoot. Nobody said anything. However Tracy was never paid for the last shoot, and the pictures were never used. Work in New York dried up. There was a rumor that Taylor threatened to sue Zoli, the agency for false advertising, but the agency did not know either. Eventually a friend confirmed that her secret had gone around quickly, but still no-one said so directly.

Caroline Cossey (Tula) was noted in Smirnoff Vodka’s “Well They Said Anything Could Happen” advertisement in 1981 that shows her water-skiing behind the Loch Ness Monster. She was a Page Three Girl for The Sun. This led to a small part in the James Bond film, For Your Eyes Only, 1981, and an associated article in Playboy. This led to her being outed as trans, and as a consequence lost most of her modelling contracts.

Tracy Norman, seeking work in Paris, got a phone call for another model, who had returned to New York. She was offered the gig, but delayed it for two weeks while she slimmed down to a French size 6. This led to a six-month contract with Balenciaga.

in New York, the new fashion sensation was the openly transgender Teri Toye, who had moved to New York from Iowa to study fashion. She was offered modeling work, especially for the cult fashion designer Stephen Sprouse, but also for Karl Lagerfeld and Jean Paul Gaultier.

Tracy Norman returned to Newark in 1984, and signed with the Grace del Marco Agency. However after a few months she was featured in an Ultra Sheen cosmetics ad, and then she was remembered. Again work dried up.

Roberta Close in Rio was becoming famous as a model and actress.

Valerie Taylor, in stealth, was working as a model in Los Angeles.

Leslie Townsend, in stealth, was working as a model in Houston.

Noor Talbi found work in Paris on the fashion catwalks at age 19, before she returned to Morroco and became a renowned dancer.

Robertina Manganaro, encouraged by her rich husband to become a stilista, opened a studio in Paris, using her title-by marriage Comtessa.

Alessandro di Sanzo, who had played a trans teenager in the films Mery per sempre, 1989. and Ragazzi fuori, 1990, was hired by the Rome fashion designer Egon von Furstenberg to walk the catwalk in a bridal dress. The Church took umbrage as she was a known transsexual.

Storme Aerison posed as a supermodel and claimed to be the sister of real supermodel Kathy Ireland. Photographers and others gave her their services in exchange for a percentage of a calendar that she said that she was producing.

Estelle Asmodelle was the face of the Supermodel Agency in Australia; she was their spokesman and main model during 1996-2000.

Sophia Lamar modelled for Levi’s and others.

Lee Si-Yeon first made a name as a male model, and was known for a feminine appearance and wearing women's clothing on the catwalk – the first model to do so in South Korea. Later she decided to transition, which was completed in 2007.

Before becoming the host on Taiwan's Eastern TV Auction Channel, Li Jing had worked as a model.

Robertina Manganaro, stilista, had her first show at the Milan Pret-a-porter, which cost her a million francs of the family money.
Time: 19:56