In 1989, as Shannon Ireland Trump, claiming to be a niece of billionaire Donald Trump, she joined the cheer-leading squad of the then Colorado Springs Spirit football team. However she was read, and kicked off the squad.

In 1990 Cheyen Weatherby enrolled at a school in Colorado Springs, explaining that she had been studying with a private tutor in Greece. She quickly became a popular student and joined the school choir and cheerleading squad. After eight days, other students noticed stubble on her face, and administrators who had been checking her background found her transcript was phony and called the police. She was found to be the twenty-six years old Charles Daugherty.

Charged with second degree forgery and criminal impersonation, she
turned up for the trial as a woman, again now calling herself Shannon Ireland. Shannon appeared on the Sally Jesse Raphael television show and claimed childhood molestation, and that she had developed multiple personalities in order to cope. She got two years probation and more mandatory counseling. 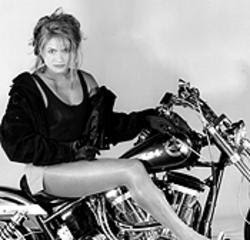 In 1994, as Storme Aerison, she posed as a supermodel and claimed to be the sister of supermodel Kathy Ireland. Photographers and others gave her their services in exchange for a percentage of a calendar that she said that she was producing.

On her website StormeIreland,com she described herself as 19 with green eyes, dark blond hair and a 38” (97 cm) bust. She obtained the credit card number and associated data of a Colorado Springs hotel and ran up a bill of hundreds of thousands of dollars in expenses. She also wrote $185,000 worth of checks on a closed account. After being arrested in 2000 she posted $100,000 bail and flew to Tahiti for a photo shoot.

Her lawyer proposed that she had mental health problems, and a judge in 2003 ruled that she was incompetent to stand trial. That same year, her story was dramatized as an episode of the Canadian television series, Masterminds.

Storme was then held at the Colorado Mental Health Institute in Pueblo until 2007 when a different judge ruled that she was competent, and had her moved to a men’s jail.

In 2008 she pleaded guilty, and was sentenced to five years in prison followed by parole and probation and 600 hours of community service. She is also to pay restitution to her victims. She was given credit for over five years in custody and released.

Later that year the Wikipedia page on her was removed.

For whatever reason Storme is not mentioned on the Wikipedia page List of people from Colorado Springs, Colorado.

The now deleted Wikipedia article uses  male pronouns for Aerison, as it still does for Tito Anibal da Paixao Gomes (compare my version).  The Wiki folk seem to have the attitude that a fraudster cannot be a genuine trans person.

Califia devotes a single paragraph to Aerison, whom he calls only Charles Daugherty, and uses only male pronouns.   This is at least ironic in that on the very same page he rightly admonishes the New York journalist writing of young trans man Sean O'Neill:  "Still, it is puzzling to find [Donna] Minkowitz balking again and again at using the same male pronouns to describe O'Neill that he uses to describe himself".  Minkowitz had previously been criticized by trans activists for refusing to use male pronouns in her influential article on Brandon Tina.  For whatever reason this last detail is not mentioned in the Wikipedia article on Minkowitz.
Time: 11:11