In December 1732 Mr James How took unto marriage one Mary Snapes. Together they had a small nest-egg of £30 (£6,000 in today’s money). They found a small pub in Epping, northwest of London, which was to let, and they took it. James was involved in an altercation with a young gentleman that resulted in a lameness of his hand. This was of such a nature that he entered an action against the gentleman and obtained damages of £500 (over £100,000). James and Mary were then able to seek a better situation, and took a public house in Limehouse. They lived there many years, in good credit and esteem. They then bought the White Horse pub on Poplar High Street, which they also ran successfully.

A woman by the name of Bentley, resident not far away, had known James when they were both young. In 1750 she asked for £10 (£2,000) that James’ sex not be discovered (this at a time when £20 a year was a good wage). James complied, and the matter was settled for many years.

James served in most parish offices and more than once was a jury foreman, although some regarded him as somewhat effeminate.

In 1765, at Christmas time, Mrs Bentley sent a repeated demand for £10, and a fortnight after that she sent again.

Around this time Mrs How took ill, and went to a friend in the country. James was not able to join her before she died, and she told their secret to the friend. The “friend” visited James in his grief and "insisted not only on their share of the whole effects, but more”.

Mrs Bentley escalated her demands and recruited two men, John Charles and William Barwick, who pretended to be a constable (Bow Street Runner) sent by Justice John Fielding (the brother of Henry Fielding the novelist). A neighbour, Mr Williams, a pawn broker was passing and was informed of the situation. He urged How to go to the local Justice. While he stepped out to change his shirt, the two men forcibly took How to the house of Mrs Bentley, where after threats How gave a draft for £100 on Mr Williams payable at a later date, and they released him.

How and Williams applied to the local bench for advice, and when Bentley and Barwick came for the payment there was a real constable waiting and they were taken to the bench of Justices sitting at the Angel in Whitechapel. How, now being outed, had reverted to female dress, and now gave the name of Mary East. Under examination, Bentley denied sending for the £100, and Barwick declared that he would never have gone if she had not sent him. They were committed unto the Clerkenwell Bridewell until the next session. Charles disappeared and was never heard of again. Bentley and Barwick served four years in prison and Barrick also stood in the pillory three times.

It was noted “The alteration of her dress from that of a man to that of a woman appeared so great, that together with her awkward behavior in her new assumed habit, it caused great diversion”, for of course he was 33 years unused to it.

Either How gave it out, or the newspapers added the story that both Mary East and Mary Snapes had been abandoned by men in their youth. In East’s case the man had been arrested for being a highwayman and transported to the American colonies. They gave up on men, and tossed a coin to decide which of them would act as the man in their relationship. Mrs How’s name, Mary Snapes, was not given in any of the accounts. 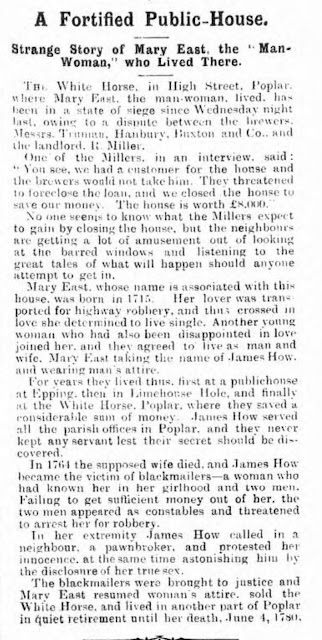 How/East sold the White Horse and retired to another part where he was not famous. He lived till 1780. When he signed a will in 1779 it was as Mary East.

The story of the transported lover and the coin toss may be true or untrue. It was a telling that went well with the newspapers in that it downplayed the idea that How was gender deviant. However given the 33 years that he maintained the role and that he was regarded as an outstanding citizen implies that he had an affinity for being male.

I was not able to ascertain from the various accounts just when in 1766 Mrs How, Mary Snapes, did die.  Was it before the trial of Bentley and Barwick in August?  It is not at all explained how friends or family of Mrs How could claim half the property.  Under the various coverture laws that lasted into the 19th century, wives had no property rights apart from their husband.

Almost all accounts spell their surname as 'How'.  Manion, without discussing why she dissents, spells it "Howe".

Some of the immediate accounts in 1765 used How’s well-earned masculine pronouns for the period pre-1766. However after his death in 1780, almost all used she/her only, put ‘wife’ in quotation marks and some even referred to him as ‘Mrs Mary East’ as if he had been married to a Mr East!!. The very recent book by Manion opts for the hopefully-temporary fashion of using they/them which of course is not How’s choice of pronouns, and is confusing.

“They were in the business of keeping public houses, which they did to great success by evidence of their ability to upgrade their situation numerous times over the years before settling in at the White Horse Tavern for roughly two decades.” (p46) Does ‘they’ mean James alone or Mr & Mrs How together?

When the two thugs sent by Bentley accost How, is ‘they’ the two thugs or How himself? “to impersonate ofﬁcers of the court who roughed Howe up physically and suggested they would be executed for their crimes” (p46).

Email ThisBlogThis!Share to TwitterShare to FacebookShare to Pinterest
Labels: 18th century, blackmail, law case, post-transition marriage, publican
Newer Posts Older Posts Home
Subscribe to: Posts (Atom)
The following sites copy this blog. Neither of them has permission to do so, and they do it in a fashion that violates my Permissions for Copying.