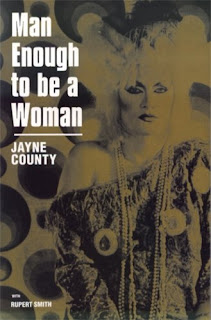 Wayne Rogers grew up in the small town of Dallas, Georgia. The family was originally Baptist, but became Methodist after moving to a better part of town. When Mrs Rogers was unable to have more children after the birth of the third by caesarean section, she turned to the Worldwide Church of God after hearing Herbert W Armstrong preach on the radio. One of Wayne's aunts killed her husband with a shotgun and walked free after claiming that he was attempting to molest their daughter. Mr Rogers lost the family home gambling.

They then moved to Marietta, which is closer to Atlanta and has bus connections. Wayne started going out dressed female. He also found a copy of John Rechy's City of Night and immediately identified with Miss Destiny, and Kenneth (later Katherine) Marlowe's Mister Madam.

After high school, he got a job in Atlanta, and after work would look for queer people. He then found the beatnik coffee houses and drag bars – although in Georgia you had to be 21 to get into a bar.

He became a Screaming Queen: they wore make-up, screamed at boys and ran away. The local word for that was 'wrecking'. The other queens were referred to as Miss Cocks, Miss Hair, Miss Car, Davinia Daisy who passed well and Queen Elizabeth who managed to get a job as a female model in an Atlanta department store. An older queen, Diamond Lil, ran an antique shop and did drag shows (she is the only one here to be mentioned in Gay and Lesbian Atlanta).


"Everyone was just gay as far as we were concerned; that was the word that we used. … it was just one big grab-bag of being different".(p29-30)

In 1966 Wayne got a Yankee boyfriend, and they got a flat together – the first time that he left home. By now Wayne was a gay hippy rather than a screaming queen. He did his first drag performances miming to Dusty Springfield and Janis Joplin at the hippy bar, The Catacombs, on the corner of 14th Street. Diamond Lil also performed there.

In 1967 Wayne took the Greyhound bus to New York City for $25 ($175 in modern money). He survived by meeting people in the Stonewall, but could not afford a winter coat, so in September phoned his father for money and returned to Atlanta.

He trained as a male nurse and worked in an old-folks' ward. One night Wayne "in hippy chick drag" took his mother's car but was stopped by the police. He was let out on bail, but the hospital was informed and he lost his job the next day. He took the Greyhound to New York City again.

The Wikipedia page for Dallas includes Wayne Rogers/Jayne County in its list of notables, but the one for Mariette does not.