Wu's father was Wu Zheng Yan, a mayor in Qingshui District 清水區, Taichung City, Taiwan. Wu was educated at the National Shimizu High School and then in 1981 Wu consulted with Dr Zhang Qizhong who sent her to Singapore for surgery with Professor SS Ratnam, as the operation was then still illegal in Taiwan. This with her father's consent. She took the name Wu Mingen.

Mingen attended the Methodist-founded Soochow University, where she passed well, but ran into problems in that the university's paperwork said that she was a man.

She adopted the professional name of Li Jing, and after working as a singer, a model and actress in a soap opera, she became an infomercials moderator. She became a star on Eastern Media Group's Shopping Channel 東森購物.

In her 2004 autobiography Li Jing wrote that she had been born a hermaphrodite, and had had surgical correction. 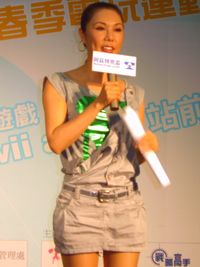 Li Jing hosts numerous popular television shows and is known as the "Queen of Auction" in Taiwan's Eastern TV Auction Channel.  She is the top auctioneer and star of the channel and holds multiple sales records, such as selling 380 one-carat diamonds in 80 minutes, 700 computer notebooks in 85 minutes and bringing in 200 million Taiwan dollars worth of sales in just one hour.

In 2009 Dr Zhang Qizhong wrote an article in a Taiwanese medical journal to share his experiences in 35 years as a doctor. He wrote about how in 1981 he had arranged a sex change for a 23XY male, and at the end of the article revealed that he was talking about Li Jing. This was picked up by the regular press. He was criticized for revealing the name of a patient, but defended himself in that Li Jing had discussed her operation in her autobiography.

Li Jing was featured in the 2012 movie Drug War 毒戰 which was filmed in China.