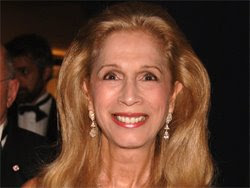 George William Ziadie was born to a Jamaican elite family of mixed European/Lebanese heritage. He was born with a genital defect which resulted in his being raised as a boy. At his all-male school he was taunted for being a ‘boy-gal’.

At age 21, she had corrective surgery and legally changed her name to Georgia. She moved to New York, and became a socialite and model.

In 1974 she met Lord Colin Campbell, younger brother of the Duke of Argyll. They were engaged on the first night and married within a week. And divorced the next year, with Lord Campbell citing his distaste that she was transsexual, and Lady Campbell complaining that he wanted money from her father. While she proclaims that she finds her ex-husband loathsome, she continues to use his name, that is ‘Lady Colin Campbell’, in her public life even 30+ years later.

She has published two books on Diane Spencer, Princess of Wales, and also an autobiography and a novel, Empress Bianca, that was pulped when billionaire widow Lily Safra threatened to sue because it too closely resembled her own life. In 2004, Georgia sued Taki Theodoracopoulos of The Spectator who had written that she had "persuaded her former husband to marry her by passing herself off as a woman". Taki paid damages and legal costs.

Lovers since her divorce have included Oliver Eden, the 8th Baron Henley who was a minister under Prime Ministers Thatcher and Major, and the actor Larry Lamb.

She has adopted two Russian baby boys, Dima and Misha.

She lived in France to escape the Blair years and became a champion of Robert Lund, a British expatriate who was convicted of murdering his wife.