Noureddine Talbi was born in Agadir, and was raised in Hay Mohammedi, outside Casablanca. Talbi was good at languages and also a teenage athlete and won gold medals in the 110 and 440-metre hurdles at the national level, but was more interested in dancing, which was done at first in the family setting, and in imitation of the dance sequences in Egyption films.

Talbi left for Spain at 18, and then France where she found work on the fashion catwalks. Her name was now Noor (shortened from Noureddine, a unisex name that means ‘light’ in Arabic).

Back in Morocco she founded her own fashion brand … but she still wanted to dance. She studied oriental dance under renowned choreographers. Initially she was snubbed, as are all artists initially, and there were rumours about her gender history. However she persisted, and performed at shows, charity galas, weddings.

Her sister acted as her manager – until she got married. Noor has adopted a child. She sent her mother on the Hajj in 2002, and wants to go herself.


“I am a strong believer; I pray five times a day, I am very close to God." 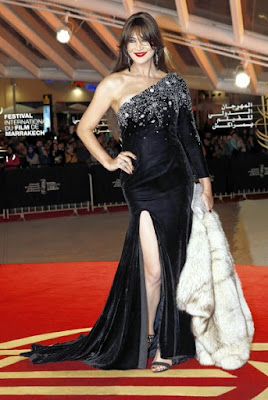 Noor became one of the best known oriental dancers in Morocco. She also dances the kabuki, the hindi, the woolof and the charqi. She can speak French, English, Spanish, Italian and three Arabic dialects: the Moroccan darija, the Lebanese and the Egyptian. She is 1.85m (6'1"), a full 2 metres in heels. She had surgery in Egypt.

She has starred in films, headlined weddings for the rich, and is a regular at big events such as the Marrakech International Film Festival, run after by the paparazzi. She teaches dance in Rabat and Casablanca, and has performed in the US, Australia and Japan.  However she chooses not to work with LGBT activists despite being asked.

However Morocco refuses to reissue her identity card, and state television continues to ban her.


'If I wasn't such a strong woman, religious, humanly and social, another might have killed herself'.