Robert Logan Carter was raised in Florida by his great-grandmother and then his grand-mother after his mother committed suicide when he was 3 months old. At 11 he discovered Marilyn Monroe. He neglected his school work:

He ran away at 13 and became a kept boy, boy hooker and transy hooker in Hollywood. In 1971, booked on prostitution charges, he fled back to Tampa. He débuted in Florida’s nightclubs as Roxanne Russell, working with Paul Wegman. He won the 1974 Miss Florida title.

Off-stage he was masculine. As did British impersonator David Dale, Logan made Charles Aznavor’s ‘What Makes a Man a Man?’ his theme song, in which he stripped as female, and ended up as male. Filmmaker Derek Calderwood recorded the act as a 6-minute film, which later became a tool for classroom debates on what is gender. 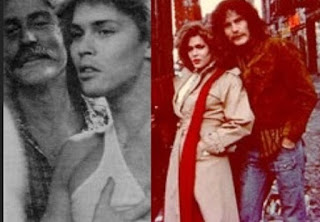 Logan shot to fame as a drag performer, and also as a male model. In Manhattan, photographers would stop him on sight asking him to pose. In male clothes he posed for a punk-rock store. Italy’s Harper’s Bazaar and Mode International ran an avant-garde spread of Logan as both male and female.

Logan performed regularly at La Cage, in Hollywood. He was on the cover of The Advocate.