In the Roman year AUC 818, the year that in the later Christian calendar would be numbered 65, Nero, in the 15th year of his rule, had a row with his second wife, Poppaea Sabina, who was pregnant with their second child. This led to his kicking her in the stomach, as a result of which, she died. He had already honoured her with the title of 'Augusta' after their first child. Nero was devastated. Her body was embalmed and put in the Mausoleum of Augustus; she was given a state funeral; and she was proclaimed to be a goddess.

He also resurrected her in a way that would fit a horror b-movie. One of his slaves had the misfortune to resemble Poppaea. Nero had Sporus castrated, dressed as the empress and addressed as ‘Sabina’. He paraded her through Rome, and publicly embraced her. They were publicly married in Greece in 67.

In AUC 821 (68 CE), as Nero's rule fell apart, he retreated to the suburb of Via Salaria with a few of his loyal servants and slaves. Sporus was among them, as was Marcus Epaphroditus, Nero's secretary, who actually helped Nero to commit suicide, or perhaps killed him.


Otho (Poppaea Sabina's previous husband whom she left for Nero), on becoming emperor, took Sporus as consort under the name Poppaea.

His successor, Vitellius, ordered Sporus to act on the stage as a woman being ravished, a final humiliation that lead to her suicide.


None of the ancient sources says anything of what Sporus may have felt.

Sporus is definitely a male name. The feminine would be Spora, but is never used.


Not the Greek mathematician and astronomer.

Nero was somewhat of a drag queen himself. He composed songs, sang and danced in public, and sometimes appeared in drag.


Poppaea Sabina was probably the first proto-Christian in Rome. Josephus visited Rome in 817/64 to obtain the release of some Jewish priests and found that Poppaea was always ready to facilitate Jewish petitions towards her husband. He succeeded in his mission, and returned home bearing gifts. He described her as θεοσεβής (theosebioi) which is usually translated as 'God-fearer'. See the entry in the Jewish Encyclopedia. It is ironic that she became a Roman goddess but not a saint.

Marcus Epaphroditus, the secretary who killed Nero, was also a colleague of Paul the Apostle, and the sponsor and publisher of two of the works of Josephus. See Philippians 2:25: "Yet I supposed it necessary to send to you Epaphroditus, my brother, and companion in labour, and fellow soldier, but your messenger, and he that ministered to my wants".    There are those who say that Epaphroditus is the Marcus who gave his name to the second Christian gospel.

A wealthy woman from the island of Lesbos who lived in the second century CE. His name is really Megilla, but he prefers the masculine form. He sees himself as really a man, and regards Demonassa as his wife. He has his hair short in the masculine style, but wears a wig over it for social occasions. We know of Megillus from the account of a woman Leaena who was seduced by Megillus. Leaena will not discuss the details of the sexual encounter but hints at some kind of substitute male organ.

There is controversy about which characters in Lucian's works are real, fictional or fictionalized rewrites of real people. Megillus feels real. He is similar to some modern persons in that some readers refer to him with masculine pronouns and grammatical forms and regard him as a FTM transgender. Others see a butch lesbian and use feminine pronouns and grammatical forms.
Time: 18:22 No comments:

One individual who is into both Body Modification and being transgender is the avant-guard musician Genesis P-Orridge who describes him/her self as pandrogynous.
Time: 10:15 1 comment:

Email ThisBlogThis!Share to TwitterShare to FacebookShare to Pinterest
Labels: bodies

An actress, young, beautiful and Irish, Lavinia had never performed in London, where she lived, but had had leading parts at various provincial theatres.  She lived with Maria, who was presented as her sister and who was seven years younger. She sometimes used the name Eliza Walstein.

She and her sister had been living in London about three years and were supported by different gentlemen. At the age of twenty four, she developed inflammation of the lungs, and despite one visit from a doctor, died very quickly.

An inquest and post-mortem were held, wherein a Dr Clutterbuck realized that she was a 'man'. All the witnesses at the inquest, some of whom had known her for over a decade (that is, since before her puberty), were amazed to find out about her gender. Mary Mortimer, a fellow tenant, had even shared a bed with her many times, as young girls will, and had never noticed anything odd. The only suspicion came from Mrs Shellett, the rent collector, who thought that her cough was that of a man. It is noteworthy that she had decided on her course before puberty, and was able to pass while experiencing the changes of that time of life.

The jury, with the compassion of the time, ruled: 'That the deceased died by the visitation of God and the jury are compelled to express their horror at the unnatural conduct of the deceased, and strongly recommend the proper authorities that some means may be adopted in the disposal of the body which will mark the ignominy of the crime'.

While we know of many FTM persons in the 19th century who passed for many years, or even until death, Lavinia is one of very few MTF persons to do so at that time.
Time: 21:30 No comments: 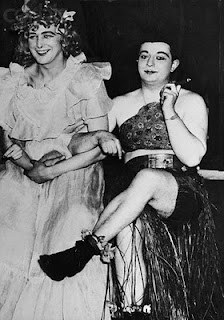 Delbert Eugene Hill, from Philadelphia, was a fire eater, who also did bits of magic tricks and some whip cracking. He went to England in 1942 as an entertainer in the US Air Force Special Services. Part of his act was in a grass skirt and coconut-shell bra as "Dirty Gertie from Bizerti". He kept performing during air-raids, and with this reputation was invited to a Royal Command Performance, 4 July 1944.

In 1945, he was re-assigned as a latrine orderly, and ran away. He disguised as Donna Delbert, "America's Outstanding Lady Magician and the Only Lady Fire Eater in the World". Female magicians were very rare, and Donna was quickly booked. She said that she was the widow of a tank gunner killed at Normandy. Between tours she worked at the Lambert & Butler factory as a tobacco-packer, where it was thought that she was a bit mannish, probably a lesbian.

The role lasted four years. Donna had two girlfriends who were in the know. One was jealous of the other, and shopped Delbert to the police. In prison back in the US, Delbert got a star turn in the inmate talent show, and wrote to The Performer telling the truth, and show-biz cronies wrote back.

Afterwards he returned home to Philadelphia, usually performing as a man, but sometimes as “Donna Delbert: The Celebrated English Magician & Fire Eater”. With time, however neither Delbert nor Donna was in as much demand, and they sold ice cream, worked in a Magic Fun Shop and even ran a diner.


They finally died of cancer in their mid-70s, and were buried in an unmarked grave.

Email ThisBlogThis!Share to TwitterShare to FacebookShare to Pinterest
Labels: air force, forces drag shows, forgotten, Gender impersonator, inmate, magician
Newer Posts Older Posts Home
Subscribe to: Posts (Atom)
The following sites copy this blog. Neither of them has permission to do so, and they do it in a fashion that violates my Permissions for Copying.