Joyce Allen from Warrington, Lancashire was a masculine tomboy who frequently scrapped with both boys and girls. She resisted having to wear girls' clothes, and took pleasure in dressing in her father's trousers. She pilfered dad's cigarettes, and when he bought a car, she, although under age, borrowed it and drove around the streets.

She had learned the violin, but at her first public performance, of Luigi Arditi's Il Bacio, a string snapped, and it was many years before Allen picked up the violin again.

She left school at fourteen, and worked at a variety of jobs, but also became well known at the local labour exchange where she befriended one of the clerks. The most satisfying job was at a local cinema.

In 1933, Joyce had met a man with whom she enjoyed going to horse races and greyhound tracks. They married, but quickly realized that 'a normal marital relationship' was impossible. Bored and incompetent as a housewife, Joyce took up gambling and lost everything, even the furniture.

Afterwards, now usually wearing slacks and with a man's haircut Allen worked in the exhibition side of the entertainment industry. She continued to suffer from stares and comments while trying to pass as a girl/woman.


"The sadistic delight of strangers in making mocking remarks about my appearance perhaps called forth a sadistic response from me. I actually had visiting cards printed, bearing a false name and address, and when people were offensive to me in public, I would hand them a card with the remark: 'If there are any further details you would like to know, perhaps you would write to me.'"

With the start of war in September 1939, Allen immediately enlisted. She was assigned as a driver to First Aid Nursing Yeomanry (FANY), and after six months was made a sergeant. In December 1941 Allen was having difficulties in avoiding a woman's sexual advances, when her mother fell ill and she was given a compassionate release.

After some weeks of caring for her mother, Allen applied for work and found a job at the Ministry of Supply where she was working with men driving heavy lorries and tippers, wearing slacks beneath a boiler suit. One evening, returning home, tired on the bus after work, Allen was subjected to an extended tirade from a man who had known her since childhood. She chased him and they fought until both were exhausted.

That done Allen knew it was time to leave Warrington. A spate of letters to film companies, advertising firms etc. produced several offers (it being wartime there were many vacancies as staff were in the forces). As a masculine woman in slacks, Allen became a secretary at the Denham Film Studios just outside north-west London, which at that time was more used than the nearby Pinewood. She was part of the team under Michael Powell and Emeric Pressburger which made The Life and Death of Colonel Blimp, and then The Volunteer, a short starring Ralph Richardson.

At this point, in late 1943, Allen received a directive from the Ministry of Labour and National Service with instructions to report as a woman porter at a London station. This provided the nudge needed and Allen went to the Ministry of Labour headquarters in person, where he was put in touch with Valentine Harvey, the Chief Press Officer who accepted Allen as a man, quashed the directive and guided him through the bureaucracy. Allen's doctor who had previously treated him only for influenza, did a thorough examination and sent samples for pathological analysis. Allen wrote to his parents explaining that they had a son and not a daughter, and received a strongly supportive letter from his father.

In 1944 Allen took a position with Halas and Batchelor, the film cartoon company.

In September that year Allen wrote to the Registrar General, and with the doctor's report and a declaration from his parents, Allen was invited to Somerset House at the end of October that year where his birth certificate was rectified. He was asked for his male name, and, unprepared, chose ‘Robert’ from a glance at somebody else's documents.

In December Robert received a legal opinion that his first marriage was void ab initio, and he was free to marry his love from the Warrington Labour Exchange who was now working at Denham. They married quietly two days before Christmas, and spent the holiday with Robert's parents.

In 1946, the British film industry suffered one of its periodic crises with the end of wartime government subsidies, and Allen was out of a job. In March his father died. Allen suffered a few years of short-term employments and unemployment.

Valentine Harvey helped yet again, and in 1948, Allen was awarded a grant to train as a medical auxiliary, and in 1951 qualified as a diagnostic radiographer.

He developed a friendship with another radiographer who was a fervent Catholic, and promised to look into the religion after qualifying. Which he did, and at Christmas 1951 was baptised into the Catholic Church. 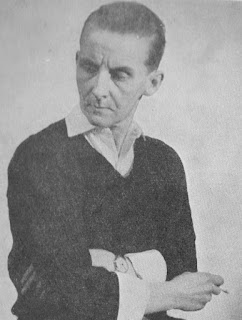 After a number of temporary radiography posts, Allen became a science teacher at a Christian Brothers run College in Liverpool.

This is one of the country's earliest officially recognized gender changes. He did not take hormones or have surgery. Obviously he had an intersex condition with anomalous genitals, but he does not say which.

Thank you for this blog post. I can add that Robert Allen got married for a second time in 1957 to a woman called Doreen Mortimore, who worked as a nurse at the Crossley Hospital, Liverpool, where the two met. Their marriage was reported in several British newspapers, including the Daily Mirror for 30 August 1957.