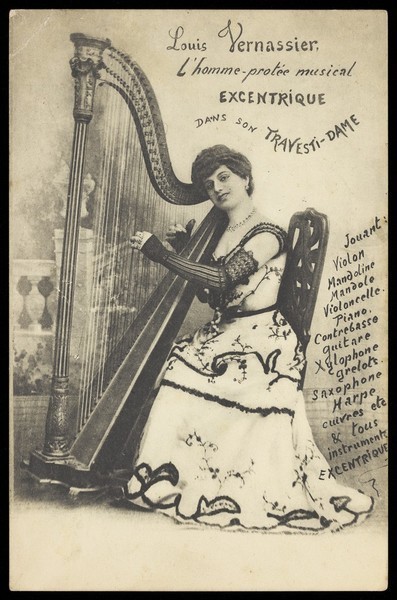 A "Vernassier, Louis" was killed in action at Saint-Jean-de-Bassel on 20 August 1914 (only three weeks into WWI) - this may be the same person. 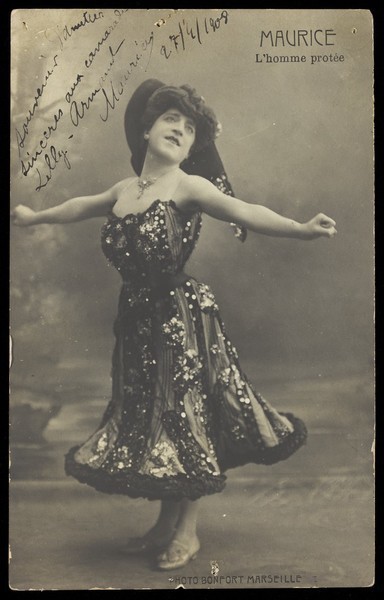 Both these photographs are in the Digital Transgender Archive, and are taken from the James Gardiner 20th Century Drag Postcards collection at the Wellcome Library. 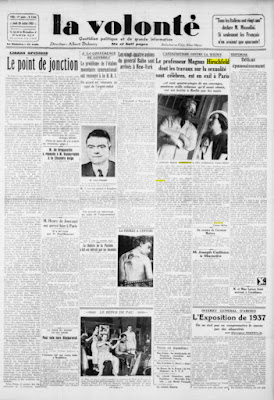 Anti-Semitism Against Science.
Professor Magnus Hirschfeld whose work on sexuality is famous, is in exile in Paris
---------------
and 180 of his works, 40 thousand volumes that he had collected, have been burned in Berlin by the Nazis.
He has been our guest for a month, staying at the Hotel d'Orsay, with his countless filing cards and a young Japanese secretary, Tao-Li, who follows him like his shadow.
A strange man, this exile from Hitler's regime, Magnus Hirschfeld: a Don Quixote of sexuality, who travelled the globe for 40 years, from Europe to China, studying the problem of sexual perversion, in Man and in animals-- even insects--to defend and treat a mystery of nature. A really great mystery, when a huge, bearded guy has an irresistible urge to put on a dress and make tapestries.
In his museum of sexuality in Berlin he saw 40,000 cases, strange cases mixing buffoonery and drama, a museum where garter belts and bras serve as men's outfitting.
I should say his former museum. For it's all gone. His 14,000 volume collection on the subject, his own 180 papers, a collection that would astonish Freud, Malthus and the Marquis de Sade-- all burned.
Tao-Li showed me in. The professor was wearing a white shirt. His dreamy blue eyes focussed on me rather severely. I was a little embarrassed. Would he take me for case no. 40,001? Thank God, his scowling expression, darkened by his gray moustache, like a Indian sculpture, lightened up. "Forty years ago," he said, "when I was a young doctor, one of my patients, an officer, killed himself on the night before his wedding. I learned the real reason for his despair only after he died. I was interested. I wrote a pamphlet under a pseudonym. The day after it was published, my bookstore was swamped with requests-- an unexpected bookseller's success. That's how I got started.
At the professor's invitation, I interviewed him. "It isn't true", he said, "that Germany has a monopoly on inverts. But there, they are legally controlled and they attract attention, while in France, the Napoleonic Code does not interfere with the private affairs of individuals. Here, cases like that of Oscar Wilde or Prince Eulenburg would go completely unnoticed."
But what about all those 'special' clubs in Berlin? "That's just it. The police watch them carefully; the problem is kept in one place where it's easy to control. According to the statistics, there are one million inverts in Germany. In Berlin alone there are 20,000 female domestic arrangements  and thousands of men in dresses and silk stockings."
His answer was vague: Several countries offered to take him, including America, China and Egypt, but he would rather stay in  Europe: "I feel more at home, especially in France, where I always find a warm welcome, and two scientists who initiated me are here, Brown-Sequard and Charcot."
It was time to leave. I was starting to feel a little insecure about my own sexuality, escpecially after Tao-Li, who was himself well versed in the subject, showed me some of the profesor's books with photos of strange patients. One of them was cutting women's hair, another only liked white gloves, a third killed himself because he couldn't get permission to dress as a woman!
On the way back, I could not get out of my mind everything that this good man had revealed to me. I began to freak out passers-by with an abnormal exprssion. At the Place de la Concorde a big car passed driven by a Japanese. Riding in back, with his hair flying in the wind, was Professor Magnus Hirschfeld.
Yvonne NOVIA

Charlaque was born in Berlin-Schöneberg and raised with the name Curt Scharlach. There was a brother Hans, seven years older. The family, who were Jewish, emigrated to the US at the turn of the century and settled in San Francisco, where Edmund Scharlach worked as a sales representative in textiles. However the mother, Jenny, returned to Germany in 1910. Edmund, who had become a US citizen stayed and remarried in 1916.

Hans returned to Germany shortly after the start of the Great War in 1914. After 1919 he worked as an independent banker, until he sold his business in the mid-1920s. Curt worked briefly as a female impersonator, and consulted Harry Benjamin who suggested Magnus Hirschfeld in Berlin.  Curt moved to Berlin in 1922 when Jenny was seriously ill, and lived with Hans for a while, but also spent time in France and became proficient in the language.

Increasingly Curt was rather Charlotte, and obtained a Transvestitenschein, to legally dress as the woman that she felt she was. She had completion surgery at the Am Urban hospital in Berlin-Kreuzberg in 1929-30, under the aegis of Magnus Hirschfeld’s Institut für Sexualwissenschaft. The surgery was done by Erwin Gohrbandt, and Felix Abraham paid the required 50 Reichsmarks. Like Dörchen Richter, Charlotte worked at the Institute, Dörchen as a maid, Charlotte as a receptionist. Her formal name was now Charlotte Curtis Charlaque. 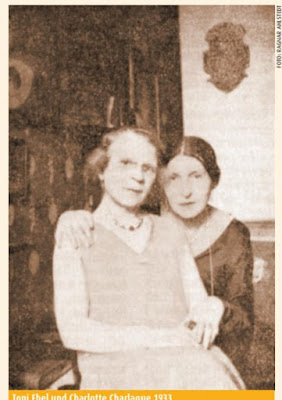 Charlotte met Toni Ebel and introduced her to Hirschfeld who accepted her into the surgical program.  Toni had completion surgery in several operations in 1932. By that time Charlotte and Toni had become lovers. The Swedish journalist Ragnar Ahlstedt visited them at their flat at Nollendorfstraße 24 in Berlin-Schöneberg, and wrote about them in his Män som blivit kvinnor, 1933. They lived cheaply: Charlotte said that she was an actress and Toni was able to sell some paintings and drawings.

Under Charlotte’s guidance, Toni converted to Judaism. In addition Toni had previously been a member of the Socialist USPD. After the Nazi takeover, one of Toni’s half sisters warned them that they were under observance, and they fled to Karlovy Vary (Karlsbad), in Czechoslovakia’s Sudetenland, the largest spa town in Europe, in May 1934. Charlotte gave English and French lessons, and Toni painted pictures for guests at the spa. The next year they moved to Prague and then to Brno. However they had to report to the police every fortnight and were advised to leave.

So they returned to Prague in 1938. Charlotte taught English and French and also gave acting courses and worked as a translator. She translated at least three stage works by the Czech writer Olga Scheinpflugová (1902-1968) into English. These are the dramas Chladné světlo (The Cold Light) , Láska není všecko (Love is not everything) and Pan Grünfeld a strašidla (Mr. Greenfeld and the Ghosts).

In March 1942 Charlotte was arrested by the Czechoslovak Aliens Police and jailed for being a Jew. Toni managed to persuade the Swiss consul that Charlotte was a US citizen, that she had submitted her documents to the US consul in Vienna and was waiting for a new passport. This resulted in Charlotte being sent to an “American camp” and later deported to the US. She sailed from Lisbon 2 July 1942. Toni attempted to follow but was not approved as Reichsdeutsche, and was not allowed to travel to Lisbon.

In New York Charlotte had to endure an extended medical exam. She was taken in by the Red Cross who housed her in a poor house in Leroy Street, Manhattan. She did some translations but suffered in her gallbladder and she had a stomach ulcer. She corresponded with Toni who settled in East Germany. She could not afford to return to Germany, and as a Jew was reluctant to do so. Later she made a living coaching young actors in “English diction”, and she also acted in several Off-Broadway productions, and was known for a while as the Queen of Brooklyn Heights Promenade. In December 1952 she wrote to Christine Jorgensen’s parents to explain that she too was transsexual.

Two Nazi-era German films, Liebe geht - wohin sie will, 1935 and Junges Blut, 1936 feature an actor Hans Scharlach. It is not known whether this is Charlotte’s brother.

Wolfert says of the ‘American camp’ that it was “probably the Liebenau internment camp, which was set up in 1940 in a former sanatorium near Tettnang (Lake Constance district) in southern Germany. Foreign women and children from the entire German Reich or interned in areas occupied by the Wehrmacht, which were intended for exchange with Americans and British of German origin.”

There is no mention of any Charlotte or ‘queen of Brooklyn Heights’ in Hugh Ryan’s When Brooklyn was Queer.

Bathyllus was born in Alexandria in the mid of the last century BCE and maybe  was originally called Gaius Theoros. He was a slave in the house of Maecenas, but later was given his freedom. He, along with Pylades of Cicicia, was credited as a pioneer of Roman pantomime (no dialogue), around 22 BCE in Augustan Rome. However the pantomimos danced a combination of old and new dances, of Greek and Asiatic traditions, and the term pantomimos had first appeared for the performer Ploutogenes before 75 BCE. Possibly what Bathyllus and Pylades did was to expand the musical accompaniment. A pantomimos was a solo artist who danced all the roles in a sequence with a different closed-mouth mask for each role, and was accompanied by a chorus who sang a libretto, a fabula saltica, supported by musicians.

Unlike Pylades, Bathyllus was noted for his feminine grace. He mainly acted female parts and his solo act, Leda with the swan was acclaimed. He was regarded as the epitome of comedic performance, and as one of the leading modernizers of performance.

Maecenas, not longer Bathyllus’ owner, was said to have become/remained his lover.

One of the interlocutors in Plutarch’s Table Talk  refers to Bathyllus’ performance as a danced imitation of ‘Echo or some Pan or Satyr revelling with Eros’.

Certainly the innovations of Pylades and Bathyllus quickly became popular, and the style was even incorporated into the Emperor cult, particularly at the Sebasteion in the city of Aphrodisias in Caria (off what is now the Turkish coast) where Aphrodite and the Imperial Family were celebrated.

However there were periods of rioting among the spectators and sometimes the dancers were banished from Rome and even Italy because of these passions.

Libenius On Behalf of the Dancers

Email ThisBlogThis!Share to TwitterShare to FacebookShare to Pinterest
Labels: dancer
Newer Posts Older Posts Home
Subscribe to: Posts (Atom)
The following sites copy this blog. Neither of them has permission to do so, and they do it in a fashion that violates my Permissions for Copying.