Foster was born and raised in Durban. She transitioned at the age of 18 with the support of her family, surgery by Derk Crichton. 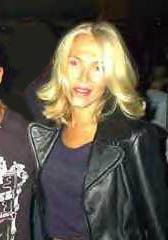 Lauren started working as a model in Johannesburg and then Paris and was featured regularly in magazines and advertisements. However she was disqualified from the Miss South Africa Pageant. Her big break was in 1980 when she was hired by Vogue to do a 6-page fashion editorial. She was outed by the tabloid Scope, when another model sold the story, which resulted in ignorant press attention. In 1984, when out transsexual Teri Toye had been marketed as the girl of the 1980s, Circulate magazine dedicated six pages to Lauren.

She worked as tour manager for Grace Jones, and then for Boy George. Then she worked for 12 years as a party promoter. She had a cameo role in the film Circuit, 2001.

She had an affair with Prince Egon Von Furstenburg and Arturo Durazo Moreno, the Mexican Chief of Police,  She has been married for over 10 years, and works as marketing consultant for a cosmetic surgery clinic.

He has been writing her autobiography, Danse Sauvage.

*Not the Financial Times journalist.