Croot was raised in small towns in New South Wales. At 16 he was seriously ill with spinal meningitis, and spent a year in hospital.

Croot transitioned to Estelle Maria Croot while at Wollongong University studying science and mathematics. Because of discrimination Estelle left university, and studied dance at Sydney Dan 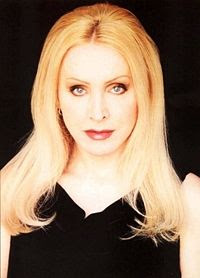 ce Company and also with an Egyptian Dance instructor.

As Estelle Asmodelle she worked as a belly dancer in variety shows in Australia and in East Asia. She was detained in Singapore and elsewhere because her passport had an ‘M’ for gender. She, and others, lobbied the Australian and the New South Wales governments that she be allowed to amend her birth certificate. She was the first Australian transsexual to get her birth certificate, and then her passport changed. She also lobbied for changes to the anti-discrimination laws and for ectopic pregnancies for transwomen. This resulted in a media storm which she was able to ride appearing in hundreds of magazine articles and frequently on Australian and Japanese television.

She lived in Japan for two years. She had a walk-on part in the Japanese film Ai to heisei no iro – Otoko, 1989, a transy sexual fantasy that mainly played in art galleries, Secret Fantasies, 1992, and the belly-dance instructional film, The Enchanted Dance, 1994 that was controversial purely because Estelle is transgender.

She took up modelling to promote her dancing, but it became her more important career. She was the first Australian transsexual to appear nude in a men’s magazine. She has also published an autobiographical novel, estellem, 2007.