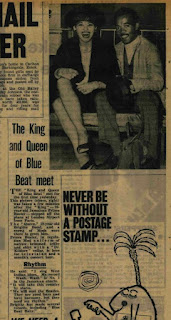 At the beginning of 1964 the then 19-year-old, Brigitte Bond, was signed as a singer by Tom Littlewood of the 2i’s Coffee Bar in London’s Soho which had launched early rock stars such as Tommy Steels and Cliff Richard. Mod, defined by fashionable clothes and modern jazz, was the new thing, and Mod had begun to incorporate the Jamaican music called Ska or Bluebeat. Brigitte had gigs across London with various aspiring musicians, and put out two songs as a 45 rpm single “Blue Beat Baby’ and “Oh Yeah Baby” backed by an impromptu group named the Bluebeats.

25 February 1964, the Jamaican Ska star, Prince Buster, arrived in England. He was met at Heathrow by a crowd of fans including Brigitte who was photographed dancing with him. This photo would later become iconic. The Daily Mirror dubbed her the Queen of Bluebeat. Prince Buster performed that same night at the prestigious May Fair Hotel and Brigitte was again photographed in attendance.

In April the Flamingo Club in Soho began a weekly Blue Beat Night, and Brigitte performed at the second show. Sir John Waller, 7th Baronet of Braywick Lodge, a noted poet and gay, was not able to claim his full inheritance of £250,000 ( £4 million today adjusted for inflation) until marriage and a male heir. He had rejected many women. One day he walked past the 2i’s coffee bar and saw a poster promoting Brigitte. He already knew her manager Tom Littlewood, who was willing to introduce him to Brigitte. He proposed to her on their first date. She accepted. This did not stop her being featured in Tit-Bits magazine in early May, or attending a Mods gathering on the beach at Margate over the Whitsun Weekend. The engagement was in the press 21 May. However she would not be able to give him a baby, and the engagement was quickly called off. This resulted in press articles stating that Brigitte was trans, that were repeated internationally. 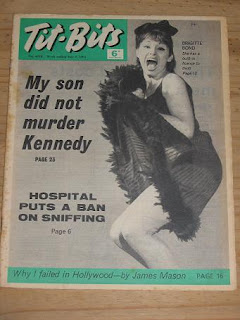 However this did not impede her career. She performed for a week at the prestigious Astor Club in Mayfair where royalty and gangsters mixed (and where the next year the gangsters, the Krays and the Richardsons, would clash and start a gang war). Brigitte transferred her management to the Arthur Lowe Agency who advertised her as “The controversial Sex Change girl with the velvet singing voice”. Other advertisements referred to her as “the Shapely French singer”. This was followed by a short African tour: Mombasa, Nairobi and Salisbury.

On return to London, Brigitte performed regularly at the Pelican Club in Soho, until it was raided for its nude dancers who broke the so-called Windmill Rule, that if nude the performer should not move. Brigitte, while not charged, was mentioned as “the worst”.

In 1965 Brigitte did a tour of South Africa and Rhodesia, and returned to headline at La Dolce Vita in Newcastle. She then did a residency In Madrid. Articles in the Spanish press mentioned her gender transition - although Spain was still ruled by Franco, this did not cause any problems.

In June 1966 US establishment preacher Billy Graham was in London for a month, and had denounced the newly fashionable mini-skirt. On 17 June he visited Soho as announced. Brigitte, who was now calling herself Brigitte St John, climbed on Graham’s car to protest his comments about miniskirts. The Sunday Mirror put her on the front page to make her point. 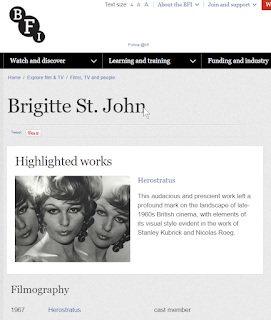 She moved to live in Spain. She claimed that she was in the 1967 James Bond film, Casino Royale, although she is not in the credits - however given the chaotic nature of the film with its many directors and cutting room compromises, she may well have been.

She is in the credits of three films 1967-1969: Herostratus, 1001 Nights and La muchacha del Nilo playing the role of ‘dancer’ in the first two and ‘Brigitte’ in the third.

By the late 1960s Brigitte St John was a ‘supervedette’ in Spain and elsewhere, mainly appearing in cabaret, and even appearing with Coccinelle. In 1974 she appeared at Madrid’s Gay Club, its first GLBT club as la Transición, the change away from Franco’s repression, was starting. She performed with the heterosexual transformista Paco España.

In April 1976 Brigitte was interviewed for a Spanish paper and revealed that she was married and living in Campania, Italy, and that her real name was Giovanna.

After that nothing was heard about her. 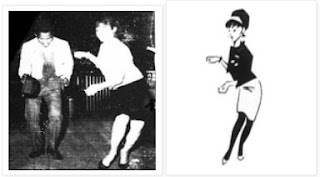 There was a revival of Ska in the late 1970s. The Birmingham band, The Beat, wanted a beat-girl logo for their first album and asked the cartoonist Hunt Emerson to create one. He took the 1964 photograph of Brigitte and Prince Buster dancing, and changed the image of Brigitte into an icon that has since then been that of the Beat Girl.

Melody Maker ran a story on the history in 1979, and included the 1964 photograph. 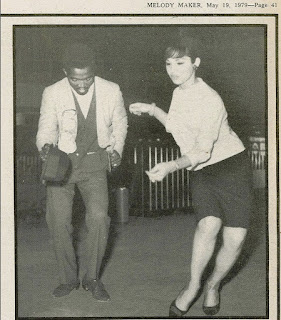 Thanks in particular for Joanna Wallace’s 30 minute YouTube documentary in compiling this.

Given the popularity of Brigitte Bardot (same spelling of Brigitte) and James Bond (the 3rd film was soon to be released) in 1964, one can see how she chose her name.

Sometimes it is said that Brigitte was either Maltese or from Marseilles. Sometimes that she had done British military service as a male. National Service required two years between the ages of 17-20. However it was discontinued in 1960 when Brigitte was 15. She may have volunteered - but how to fit in two such years, and then gender transition and surgery all before arriving at the 2i’s club as age 19?

Wallace says that “Blue Beat Baby” came out in March, after Prince Buster’s tour. However it is referred to in the Daily Mirror article 26/2/64.

The Flamingo Club had become well-known after a fight there in October 1962 between lovers of Christine Keeler led to revelations of her affair with John Profumo, the Minister of War, that in turn led to the defeat of the Conservative Government in 1964. For more on the Flamingo Club see Chp 11 in Rob Baker’s Beautiful Idiots and Brilliant Lunatics, 2015. Also online.

Both the Wikipedia entry and the first obituary re Waller in the Independent say nothing at all about John Waller being gay and nothing about Brigitte. Both of them skip from the 1950s to the 1970s. Waller did eventually marry in April 1974, and had a daughter. However, due to the sexist nature of aristocracy, this did not count. He died in 1995 without ever getting the full inheritance.

Brigitte's dance in the film Herostratus: