Richard Finocchio was raised in South Philadelphia, and bullied at school for being too pretty. A friend of the family was a gay man who introduced young Finocchio to the gay subculture, where acceptance was found.

Finocchio started winning drag contests. The Hotel Philadelphia (now demolished) at Broad and Vine Streets was the site of the annual Miss Philadelphia contest. The contest was organized by Sabrina (Jack Doroshow). The big winner in 1967 was Finocchio using the name Harlow (in homage to Jean Harlow, the 1930s movie star). Harlow did a few times visit The Stonewall Inn when in New York, but preferred the straight uptown scene. 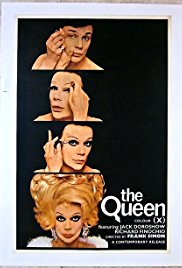 Harlow won the Miss All-American Camp Beauty Pageant held in New York in 1967 (again organized by Sabrina). This was filmed, and released as The Queen, 1968. The contestants are shown chatting in their hotel rooms, discussing how they were not called in the draft, their boyfriends, why they would never have a sex change. Harlow throws a fit because he does not have a suitable wig (although her own hair is quite feminine enough). The other standout among the contestants is Miss Manhattan (Crystal LaBeija, who later founded the House of LaBeija) who stages a tantrum when Harlow wins. The film includes shots of only Harlow arriving and departing, and on stage she gets longer and better-lit close-ups than the other contestants.

She went to Cannes International Film Festival with the film and was a center of attention. David Bowie, in his androgynous phase, cited her influence. A few other minor film roles followed, and, especially in Philadelphia, she became a night-life personality. Bar owner Stanley Rosenbleeth opened Harlow's in the Old City area in 1970, with Rachel as hostess. The place was an immediate sensation. A short time later, a second Harlow's was opened in Atlantic City. There were also interviews, endorsements, modeling jobs and television appearances.

The Philadelphia disco-nightclub was a place that attracted celebrities, and one person who came was John B. Kelly Jr., brother of Grace Kelly, film star and Monaco princess. In his own right Kelly was an accomplished rower, a four-time Olympian, and an Olympic medal winner. He was also a businessman and was 12 years on Philadelphia council. He separated from his first wife in 1969. In 1975 he began a well-publicized affair with Rachel. He ran to be the Democratic candidate but his mother publicly and financially supported his opponent. This combined with the publicity over his affair led to his dropping out. He claimed that he intended to marry Rachel, but a year later, after his mother threatened to disinherit him, he ended the relationship.

Rachel was having problems finding her identity. She dropped out of the night-life business and the gay subculture. She did continue to work as a model in New York, but avoided publicity.


"I was burned out. I was tired of being on all the time. I began to dread meeting new people, having to talk about my life.  Even now, the only way I can talk about my life is to think of it as just a story. It's as if it all happened to somebody else, and I'm just telling about it."

One night in 1979, she and a woman friend stopped for a drink in a small bistro, got into conversation with two men, and a year later Rachel and Gerard Billebault were married. On the wedding day:


“I came out of my mother's South Philadelphia house and there were 500 to 600 people waiting in the street for me to leave the house. It wasn't the neighbors, it was the neighborhood. I turned to my mother and said `Look mom, it's all the neighbors - I guess they have forgotten, too' ''.

There was a famous nightclub in San Francisco owned by another Finocchio.   There is no evidence of them being relatives.

The IMDB, entry for a long time, was in Rachel’s boy name.  In fact, in the cast list for The Queen, it said: “Richard Finnochio as Harlow” rather than "Harlow as Herself".   It now says Rachel Harlow plays Harlow (as Richard Finnochio)
Time: 15:54