John Coulter was a man of definite masculine appearance with good muscular development.

At the age of twenty-one he was working as a man-servant on a farm near Dungannon in County Tyrone. In this position he courted his master’s daughter, and was successful in marrying her.

From 1872 he worked for the Belfast Harbour Commissioners as a labourer. In 1878 his wife started living apart from him because of his dissipated habits.

He died from injuries caused by falling down a flight of stairs, and was discovered to be female bodied.

His wife returned to bury him.

The story was written up in The Lancet.

*not the Irish surgeon-apothecary who became famous for working on whaling ships in the 1820s and 1830s.

An elderly Congregational minister, the Rev. Arthur Read was featured in the press in the late 1920s when he was captured as the supposed female ghost that had been haunting the lanes around the village of Curry-Rivel, near Taunton in Somerset for a few years.

Villagers had reported seeing a large female ghost, usually veiled, who hung around after dark.  One day in 1927, Read was recognized by the local postman as the supposed ghost. This story quickly went around the village. Later that evening, a visitor staying at the King-William Inn, reported that he had just seen the lady in question. Two men took bicycles and caught up with her near Stoney Lane. The two did not then know the Rev Read, but Mr Woodrow, a leading member of the Congregational Chapel, had followed and immediately identified his minister.

Read bumped into one of the three men the next morning in the village and gave a partial excuse. He followed up by issuing a handbill, “Talks by the Masquerader”, inviting the public to hear his explanation. There would be separate meetings for men and women, and boys and girls under 16 would not be admitted. However the only meetings held were in the nearby village of Drayton.

Alfred’s explanation was that he had cross-dressed , usually when his wife was away, to see if men were so immoral that they would flirt with a strange woman. Without the knowledge of his wife, he had acquired female garments from items to be sold at rummage sales.


'It was difficult, for my height was against me. But by pressing a hat down tight on my head and stooping as much as possible, I seemed shorter.'

In this guise, Alfred went many places, in the country and in the city. To his surprise and satisfaction, no one gave him any trouble.


“Only once did an immoral man molest me. That was at a far-away seaside resort. I sat on the sea front, and all at once I felt a man leering at me. It was a terrible feeling, and I moved away quickly.”

He was therefore very impressed by the high moral standard of English manhood.

He referred himself to the Somerset Congregational Union, where he promised to stick to preaching.

His congregation released a statement:


“We do hereby place on record our unqualified conviction that such behaviour was not due to any moral laxity, but is the result of a nervous disorder induced by anxiety and over work. Further, we record our gratitude to God for our pastor's long and arduous ministry and affirm that our church has been most happy and successful during his four years as our leader. We have found him a helpful preacher and devoted friend and pastor, recklessly spending his strength in bringing the church through great difficulties to a place of honour in the community and the union.”

However Rev Read resigned his pastorate at the end of November 1927. He is still remembered for his efforts in raising 1,000 guineas which was used to reconstruct and renovate church buildings in the village.

If his intention was to discover how women are treated by men, he could have started by asking his wife and other female members of the congregation. However that was probably just an excuse.
Time: 20:26 No comments:

Email ThisBlogThis!Share to TwitterShare to FacebookShare to Pinterest
Labels: Religious 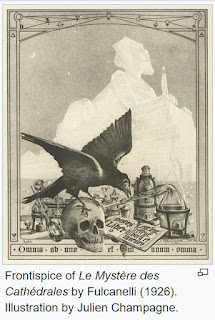 Fulcanelli is the name, almost certainly a pseudonym, on two esoteric books, Le Mystère des Cathédrales and Les Demeures Philosophales, both published at the end of the 1920s, which discuss alchemy, architecture, science and languages.

In accordance with the alchemical tradition Fulcanelli obfuscated the details of his life. However he is reputed to have made the philosopher's stone that transmutes metals to gold and imparts longevity and androgyny.

He disappeared after his books were published, except that in 1937 Fulcanelli apparently met Jaques Bergier and Andre Helbronner, French scientists, who were working on nuclear physics, to warn them of its potential (this was five years before the start of the Manhattan Project). Bergier reported him saying:


“… the vital thing is not the transmutation of metals but that of the experimenter himself”.

Eugene Canseliet, Fulcanelli’s only student, met him for the last time in probably 1954, when Fulcanelli would have been over 110 years old - if he had indeed made the philosopher's stone this would not be surprising. Canseliet went to Seville where he was contacted and taken by a circuitous route to an isolated castle.

Fulcanelli was there looking younger than he had done in the 1920s. In Canseliet's presence, Fulcanelli appeared in female guise, a hypostasis of the Divine Androgyne of alchemy.

Ashley qualified as a doctor, and married young. At age 25 he knew he wanted to be a woman, and the marriage ended in divorce.

She had completion surgery in 1978 and became one of the two practicing pediatricians in Sedalia, Missouri, a town of 21,000. In 1985 she adopted a baby boy.

In late 1989 Ashley decided that she wanted to be man again, and mentioned that she did so in an interview with the Sedalia Democrat. Many of her patients rallied in support.


In 1937, Edward Dolan (we have only her male name) was living with her husband, Kenneth Reese, a hospital orderly, at an apartment building on Ludlow Street in Manhattan’s Lower East Side (in fact only three blocks away from where Marsha P Johnson would live 30 years later). The Building was known as ‘the house of all nations’ because of the variety of its tenants.

Neighbors reported that Dolan “sometimes went out dressed in the attire of a woman”, and when questioned claimed that he worked as a female impersonator, and “preferred to dress at home”.

In late May 1937, the neighbours complained about much noise and commotion in Dolan’s apartment, and some hours later Dolan was found dead, strangled.

1) Was Dolan a professional female impersonator? There is no statement about a bar or nightclub where she was appearing. Perhaps she felt that she needed an excuse to wear female clothes when the neighbors had noticed her. It was actually quite unusual for professional female impersonators to dress female outside work at that time. Artists in the 1950s are considered pioneers for doing so: Mrs Shufflewick, Ron Storme, the performers at Le Carrousel, Hotcha Hinton. We might also consider the police raid on New York's Black Parrot Tea Shoppe Hobo-Hemia 14 years earlier when Ruby Bernhammer (non-professional) and Rosebud (professional) were nabbed. Variety and the New York Times disagreed as to whether Rosebud was in mufti or in female dress.

2) WhoDunnit? Was it the husband Kenneth or a third party? I could find no record of any arrest in the case. Nor any mention of Kenneth - did he stay or flee?
Time: 12:56 No comments:

Revival of an old bogey-person


I assume that the participants in the thread are youngish. Their older sisters would have been quite aware a long time ago of Douglas’ ‘scandalous’ letter, which was published in Sister magazine Aug-Sep 1977. That is 42 years ago. The infamous Janice Raymond published a selection from it in her The Transsexual Empire, 1979.

"Free from the chains of menstruation and child-bearing, transsexual women are obviously far superior to Gennys in many ways .... Genetic women are becoming quite obsolete, which is obvious, and the future belongs to transsexual women. We know this and perhaps some of you suspect it. All you have left is your 'ability' to bear children, and in a world which will groan to feed 6 billion by the year 2000, that's a negative asset."

Now again this is being used to justify negative emotions. One of the Reddit contibutors writes:

“These dudes are so full of rage that they will never be us. They KNOW they are just men with fetishes in bad wigs. I used to think HSTS trans weren't AGP, but I've since been disabused of that myth. This is only further proof.”

There are various adjectives that could describe Douglas’ letter: satirical, ill-advised, arrogant, foolish, counterproductive. The editors of Sisters magazine in 1977 had enough sense of humour to print it, and their readers laughed at it, and that should have been the end of it. However two years later Raymond was looking for things said or done by trans women that she could pretend to be scandalized by, and as her book is still read by anti-trans people, the tale of Douglas’ letter gets repeated again and again.

The Reddit thread suggests that one foolish person can bring an entire movement into disrepute. That game goes both ways. Here is a list of lesbian serial killers. Here is review of a book about the suffragettes pointing out that some of them went way too far, e.g. bombing unoccupied houses (unoccupied meant that only the servants were there).

In fact all non-fascist social movements contain good and bad, wise and stupid, eccentric and otherwise. This encyclopedia features all kinds. Here is a pointer to trans persons convicted of murder – to balance the lesbian serial killers link.

Douglas did good in organizing TAO in Miami. Douglas did bad in sending trans women to Dr John Brown.

All of Raymond’s books are aligned with dogmas of the Catholic Church. In addition to transgender, she is also against abortion, contraception, reproductive technologies and the decriminalization of prostitution. In the early 1980s she campaigned against medical care for trans people, and both federal and private insurance care was thus denied to those who needed it. It must be the case that some died as a result.

Women in the US and elsewhere have their rights under attack. Serious issues like the right to choose, access to contraceptives, access to medical care, misogynist murders etc. Real issues! And these women on the Reddit forum are spending their time getting worked up about a letter written 42 years ago that perhaps deserved momentary attention, but not four decades of people saying the same thing again and again.
________________

Email ThisBlogThis!Share to TwitterShare to FacebookShare to Pinterest
Labels: feminist criticism, TAO
Newer Posts Older Posts Home
Subscribe to: Posts (Atom)
The following sites copy this blog. Neither of them has permission to do so, and they do it in a fashion that violates my Permissions for Copying.