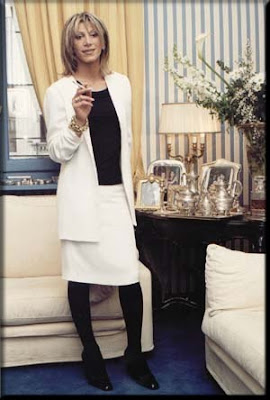 Manganara was born to a noble and rich family in Calabria, her mother a French psychoanalyst, her father a surgeon. She was taking hormones at 14, and was even permitted, at her private school, to wear a skirt.

Her mother, thirty years younger than her husband, left him and returned to Paris. Robertina and her father moved to Milan, where she was known as his daughter. She became a model for the avant-garde artist, Enrico Baj (1924- 2003). At age 20 she had genital surgery at a private clinic in England.

Following the family tradition, she qualified as a doctor, as did her brothers, and did an internship under the supervision of a friend of her father. However it did not work, even though she was Dottoressa Manganaro. Her proclivity for dressing in high fashion with high heels and jewels did not help.
Robertina returned to modelling which she found more friendly. She lived on the family money. She met Count Gianfranco Torelli, a wealthy aeronautical engineer, and they dated for a couple of years until he declared that he wanted to have a child with her. The next evening she told that she was transsexual, and did not see him again for a few years. Eventually she met him again at a dinner party. He chased her and took her to one of his estates for the weekend. Eventually he accepted her, and they were married in 1993.

Gianfranco encouraged Robertina to become a stilista. At age 35 she opened a studio in Paris, using her title Comtessa. At age 42 had her first show at the Milan Pret-a-porter, which cost her a million francs. "I do not do fashion to make money. I have money to make fashion". Even so there are limits: "If I have ever been discriminated against as a transsexual, it is as a fashion designer".

*Not Roberta Manganaro the dancer.