Townsend grew up in Philadelphia. After learning about Renee Richards, and seeing a Donahue episode about transsexuals Townsend sent away for some informational materials which were then discovered by father. Townsend was then sent for professional help to, among others, John Money.

At 19 Leslie left home for Key West, New Orleans and then New York. She worked as a female impersonator and a sex worker. She had genital surgery at 23. She was married to a man for 18 months. She moved to Houston and was reasonable successful as a model, acting in commercials for malls and condominium complexes. In Los Angeles she was an extra in television shows: The West Wing, Alias, Boomtown and Malcolm in the Middle. In Las Vegas she was a stand-up comic. She has also worked as a secretary and tended bar.

After 20 years of stealth she wrote her autobiography and started speaking at colleges and transgender groups.

"Following my surgery, I realized that I could fit into society as a woman and no one would ever be the wiser. And until very recently I lived in deep stealth. In fact, I was in so deep that I didn't know there was a name for it. Stealth. Once I was told its meaning and it's use in the transgender community, I realized that it is definitely a word that describes the last twenty years of my life. In all that time I never found it easy or advantageous to reveal the details of my past to anyone. I'm sure that fear was the motivating factor in keeping my secret. Fear of rejection, loss of friendship, loss of boyfriends. In retrospect, I think I feared the loss of my female persona and validation of that persona that I received from the men in my life. Fear can be such a crippling emotion. For me, the prospect of divulging my secrets went hand in hand with giving up life as I knew it in my seemingly secure little world. Looking back, I have to wonder how secure that world was if one tidbit of information could have brought it tumbling down. It has taken me all of those twenty years to come to terms with the shame I held onto for so long." 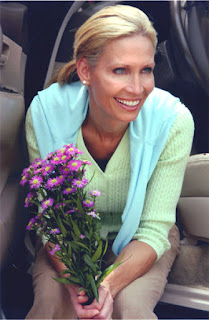 Leslie has moved back to Philadelphia to reconnect with her family, and is now active in real-estate development. She has set up a fund for transgender students at the University of Pennsylvania.

She was also part of the all transgender production of The Vagina Monologues, and the resulting film, Beautiful Daughters.

*Not the Derbyshire cricketer, nor the Australian cricket umpire, nor the Royal Navy Rear-Admiral, nor the Ohio River historian.
IMDB
Time: 09:02