Jan resigned from the all-male Travellers' Club, gave away James' dinner jacket and wrote to Who's Who to change her entry. At her own pace she changed her public identity.


"Presently I took to signing articles and reviews as Jan: also letters to The Times, whose letters editor imperturbably printed them, through the sequence of male to female, without comment."


"Few people understood it. I did not expect them to understand the cause, since it was a mystery even to me, but I had supposed more people might understand the compulsion. I had once surmised that it might be an impulse common to all male persons, and though friends of both sexes vehemently deny it, it still seems to me only common sense to wish to be a woman rather than a man – or if not common sense, at least good taste."

The second volume of Pax Britannica, Heaven's Command: An Imperial Progress, came out in 1973, with James' name on the title page. 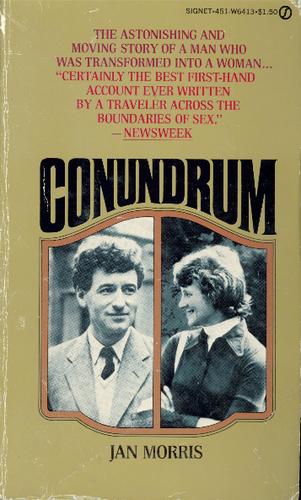 Morris' colleague, David Holden, wrote an essay, "James & Jan", on his experience of Jan's transition and it appeared in The Sunday Times, 10 March 1974.  Jan's account of her transition, Conundrum, was serialized for four weeks in the same newspaper in April, and then published as a book. As she was a well-regarded and famous journalist, her autobiography was much reviewed, although the reviews were uncomprehending at best, and some were vituperative.

The review in The Times Literary Supplement by Russell Davies was particularly cutting: He asked


"Is it not just a token immersion in what may always have been a shallow, impressionistically received idea of womanhood?"

and cites her anecdotes of gossiping at the shops as having nothing to do with womanliness. Jan was sufficiently hurt that she wrote to the editor to specify that Davies' review was just one in a wide range of "love and bitterness, hope and sorrow".

Rebeccca West wrote for The New York Times and said:


"She sounds not like a woman, but like a man's idea of a woman, and curiously enough, a man not nearly so intelligent as James Morris used to be.”


"A woman? The handbag swings and the muscles are softening. Women's chats, a woman's interest in clothes, finding men attractive, pleasure in the fact of being socially cosseted, are coming on. But essentially, Jan is an invented woman, for she has not been formed by the psychic-physical fate and surprise of menstruation or the power-giving possibility of child-bearing".

Nora Ephron was appalled by Morris' notion of what it is to be a woman:


"I always wanted to be a girl, too. I, too, felt that I was born into the wrong body, a body that refused, in spite of every imprecation and exercise I could manage, to become anything but the boyish, lean thing it was... I wanted more than anything to be something I will never be – Feminine and feminine in the worst way. Submissive. Dependent. Soft-spoken. Coquettish. I was no good at all at any of it, no good at being a girl; on the other hand I am not half bad at being a woman. In contrast Jan Morris is perfectly awful at being a woman; what she has become instead is precisely what James Morris wanted to become all those years ago. A girl. And worse, a forty-seven-year-old girl. And worst of all, a forty-seven-year-old Cosmopolitan girl."

Despite these reviews Conundrum became one of the best selling and most discussed transsexual autobiographies. Jan and Elizabeth did later divorce, but keep on living together as a couple.

The third volume of Pax Britannica, Farewell the Trumpets: An Imperial Retreat, came out in 1978, again with 'James Morris' on the title page for consistency.

Janice Raymond published her The Transsexual Empire in 1979. She was delighted to find examples of a transsexual embracing the gender stereotypes that feminism was rejecting. However the only negative review that she quoted was that by Rebecca West. 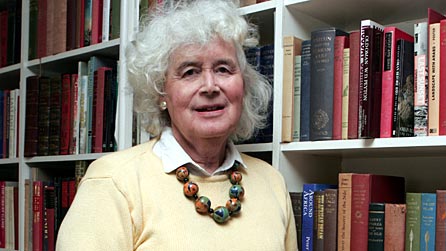 Jan was shortlisted for the Booker Prize with her first novel, Last Letters from Hav in 1985.

She returned to autobiography with Pleasures of a Tangled Life, 1989, which is a collection of her essays. Only in the essay "As to Sex" does she discuss how she is famous to people who never read her books.

She was elected to the Welsh Gorsedd of Bards in 1993.

She was offered a CBE in 1999, and despite being a Welsh republican she accepted it.

Jan and Elizabeth were formally re-joined in a civil union in 2008, after living together for nearly 60 years.

Raymond quotes Rebecca West but does not say where she got the quote from.  She certainly does not quote the male reviewers.  She could have made a much better job making her point - this  illustrates well that even if you were to agree with her position, she is still not a good scholar.

Patrick Califia follows Morris in referring to Dr B-- and does not identify him as Georges Burou.

I have listed only the most relevant of Morris' books above. See Worldcat or Amazon for a fuller list.

Unlike for Femke Olyslager, the editors at Worldcat have revised James Morris' books to be by Jan, even when the edition is question was issued as by James.

David Holden was a colleague of Morris whose article "James and Jan" preceded the serialization of Conundrum in The Sunday Times. He was working for the newspaper in Cairo three years later when he was killed execution-style. Sunday Times editor Harold Evans used three of his top journalists to investigate but no group ever claimed responsibility and the murder remains unsolved.

It seems that Jan never did engage with the dialectic of feminism beyond the facile dismissal quoted in part 2.

The Traveller's Club is still a 'gentlemen's club': that is no female members.  Unlike say Stephanie Anne Booth who used her legal masculinity to attend the Lancashire Cricket Club AGM, Jan made no attempt to open up The Traveller's Club to female travellers.

Neither does she discuss her class entitlements beyond mentioning them as natural.  She does not tell us what her father did, but implicitly he was so placed and had the financial means to send James and his brothers to Public School (that is: expensive private schools).  Today 7% of the UK has been educated in Public Schools, so I will assume the same percentage in the 1940s.   James left Lancing after only three years which should not have enabled him to get into any university, let alone Oxford.  When he volunteed to join the army he was sent to officer school.  My father and my uncles volunteered in the same war with no such offer, but then they were in the bottom 93%.  The two-year degree at Oxford was intended for veterans, but only for those with the right background.   The degree at Oxford led to an introduction to the editor of The Times: a foot in the door that most of us never get.   Morris was initially resented by the Everest climbing team, but managed to overcome that resentment - which is to his credit.  He "trod the long well-beaten, expensive and fruitless path of the Harley Street psychiatrists and sexologists".   That is, he did not use the NHS like the rest of us, although he did end up at the same Charing Cross gender clinic, and the same clinic in Casablanca that many transsexuals of limited means were able to save up and access.
Time: 17:14