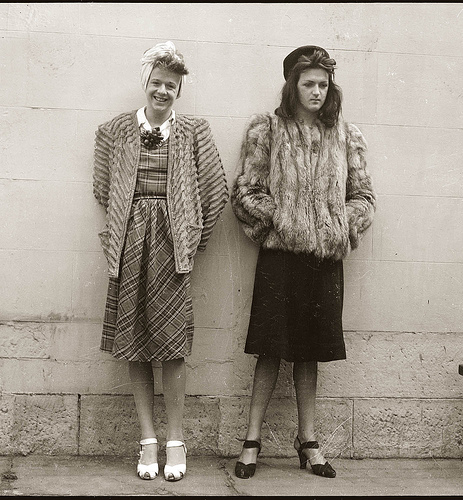 A photograph of this same pair appears in the newspaper Truth, of 14 June 1942, taken after they had appeared at North Sydney Police Court on charges of being idle and disorderley persons, having insufficient means of support, and with having goods in their possession - including a military uniform and an American dollar bill - believed to be stolen. After being remanded in custody for a week, both were released on bonds. Of the photographs, McQuade later said to a Truth correspondent: 'We were bundled out of the police cell, and snapped immediately. My friend and I had no chance to fix our hair or arrange our make-up. We were half asleep and my turban was on the wrong side.'

McQuade told the paper of his ambition to be a professional female impersonator, and spoke of his admiration for his mentor, Lea Sonia, who had been killed not long before getting off a tram in the wartime 'brownout'.

The Wife of Convict SYF45, nurse.

A story was told in The Evening News on 8 September 1955. In Parkhurst Prison on the Isle of Wight, an old lag wishes to unburden his conscience. The old lag had been a sailor, and in 1887 he fell ill and was hospitalized. He fell in love with one of the nurses, and they were married before he left on a last voyage. On return he had a few drinks with his shipmates and he went off with one of the prostitutes who joined them.

His wife would no longer sleep with him. One night he found a bloodstained carving knife on the kitchen table, and a few days later a pair of his trousers hanging to dry though still bloodstained. His wife admitted that she was doing the Ripper killings: 'Both of our lives have been ruined by women of that class - and I'll see they don't wreck other people's lives!' She would dress as a man - as a sailor - but carry a nurses cloak and bonnet in a bag. The deed done she would dress as a nurse and calmly walk away. After the death of Mary Kelly, a man was suspected and almost charged. Not wanting an innocent man to be punished, she decided to stop the killings.

Robert Stephenson Smyth Baden-Powell. hero of the siege of Mafeking, the founder of the Scouts, and thus of a new type of drag, was also an amateur female impersonator.


He had a very distinguished career with the British army in India, southern Africa and elsewhere, rising to the rank of Lieutenant-General.


All through his life Baden-Powell was keen on amateur theatricals, from Charterhouse public school where among other roles he played fem

ale operatic roles. With his music master at school he shared the ability of being able to sing in a convincing female soprano. In the army he made a speciality of female roles and would often make his own dresses. His stage specialty was what he called his skirt dance.


From 1881, he had a particularly close friendship with a younger man, Kenneth McLaren, whom he would call 'the Boy', and, after comforting him after McLaren's mother died, the two men became very close. They took a bungalow together and Baden-Powell's letters home were constantly referring to his new friend. They shared many activities, in particular polo and pigsticking.


At this time Baden-Powell wrote a short story 'The Ordeal of the Spear' about two officers, 'an unusually good pair of friends' who both wanted to marry the same woman. They decide that whoever inflicted the first wound in a bout of pigsticking would be the one to propose to her. The 'boy' drew first blood, but before he has a chance to propose, the young woman was thrown from the back of an elephant and trampled underfoot. This allowed the friendship to continue unchanged.


In addition to his drag shows, Baden-Powell balanced his love of manly activities with sketching, choosing fabrics and furnishings and designing embroidery patterns. He was quite uncomfortable with women in a context where he might be considered a prospective husband, but could get on with them quite well where all hints of sex were removed, e.g. in considering fabrics and embroidery.


He maintained a number of correspondences with girls, but let them lapse as they matured into women. He did not marry until the age of 55, when he chose an androgynous 23-year-old, Olave Soames.


At a time when British officers were very conscious not to socialize with their men, and hardly treated them as human, Baden-Powell spent much of his free time with the men under his command. He took them scouting, of course he participated in theatricals with them, he also joined them in gymnastic displays involving physical contact, and he gave them counselling. On the other hand this was only extended to young men; middle-aged men where more likely to experience his snobbery.
EN.Wikipedia

There was previously a Wikipedia page called "Robert Baden-Powell's sexual orientation", but which has since been removed.    Here is its Archive.

Email ThisBlogThis!Share to TwitterShare to FacebookShare to Pinterest
Labels: aristocrats, heterosexual drag queen, military, scouting, state honours
Newer Posts Older Posts Home
Subscribe to: Posts (Atom)
The following sites copy this blog. Neither of them has permission to do so, and they do it in a fashion that violates my Permissions for Copying.