Sulka from Dallas met Kim Christy in 1979 when she was in the audience at an event in Los Angeles and he was doing the photography.

Sulka was then featured on the cover of New Female Mimics, where he was the new editor, and did 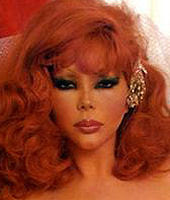 some work in the office. She had had various silicone injections and feminization surgeries, and looked rather artificial, but did make an impact. She was promoted by both Kim Kristy and by Jennifer Jordan, owner of New Female Mimics.


Her first film appearance was  as secondary role in Dream Lovers in 1980, directed by Kristy. This was supplemented by the magazine Sensuous Sulka and others which also emphasized her pre-op status.

She continued living in the Hollywood area, but became reclusive. At one time she was advertising in underground Hollywood papers that she did transvestite makeovers at $100 a go. It was reported a few times that she had been seen at Peanuts bar when they had a "queens' nite".

There are several Sulka look-alikes.

The Transformation of Sulka is featured on many of the sites that give basic details of films, but for some reason none of them give a summary of the plot.  The best evasion is found here at SynopsiTV:  “This is probably about something. It is probably very interesting, with great character development, plot buildup, and a nail-biting climax with a twist that will blow your mind. We just don’t have the details.”
Time: 08:39