John Delia was the son of a builder, John was Rh-negative and required a transfusion within hours of birth. His mother doted on him and, preschool, dressed him as a girl. He attended Manhattan’s High School of Art & Design and specialized in music.

He graduated to become a drag artist: doing lip-synch impersonations of Diana Ross. He would perform without underwear so that the audience could see his penis under his skirt. At age 21, after several gay affairs including one with Robert Ferrara, he started seeing a psychiatrist with a view to transition, took estrogens, and had facial surgery.

Then he met Robyn (originally Roberta) Arnold, the rich daughter of an ear, nose and throat surgeon. They became lovers and John stopped his hormone shots and started lifting weights to discourage his breasts. His father was delighted. John was starting to perform at the major Manhattan discos. John announced that they would marry.

However his urge to be a woman had returned. After discussion, Robyn agreed to support him in this. In November of that year he flew to Dr Biber in Colorado and returned as Diane (from his favorite impersonation subject). Diane worked for a while as a nightclub hostess in Montréal, and as a model for Avon cosmetics.

After a run of unsatisfactory promiscuity she persuaded her old flame, Robert Ferrara to marry her, which he did, in his home town of Berwick, Pennsylvania. His parents tried to talk them out of it, and a neighbor objected to the sheriff that they were two men, but Dr Biber's affidavit and a reissued birth-certificate carried the day. Robyn paid $1400 for the wedding ring. Although Robert had had affairs with women, he did not relate to having sex with Diane. They also argued and fought, physically. So she moved out, and in with Robyn.

The move expanded into a two-day party. After the party Diane agreed to meet Robert to talk over their difficulties. She was never seen again until her body washed up in the Hudson River. Robert and Robyn lived together in the latter's apartment after the murder. They were charged together that they had both shot her. Robyn, with her expensive lawyer, was acquitted. Robert, with his inexperienced lawyer, went to prison. The bar where Diane used to do her Diana Ross impersonations commemorated her passing by having several people imitate her impersonation. 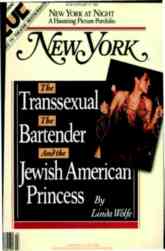