Despite childhood desires to be a girl, Lew Lawrence married a wife, Virginia, at 18 in 1930, and they had a daughter. He was briefly a bank clerk. Virginia died five years later. Lew started corresponding with other transvestites.

He met Montez who at first accepted his cross-dressing, and they married in 1941. The strain of keeping the secret led to her having a nervous breakdownm and she divorced him in 1944.  Lawrence now transitioned to living full-time as Louise.

Louise moved to San Francisco from Berkeley. She managed an apartment building for working women, and also sold some artwork. She also found a female partner, Gay.  She knew some of the performers at Finocchio's, attended gay drag parties, and worked with the homophile Mattachine Society.

She worked to educate the doctors who were interested in transvestites.  From the mid-1940s she worked with Karl Bowman at the Langley Porter Clinic.  She gave a presentation at the University of California Medical School at San Francisco, where a 33-year-old Arnold Lowman was in the audience and fascinated.  He obtained Louise's address and pestered for a meeting.  He gave his name as Virginia Prince as he lived on Prince Street.  She introduced him to other transvestites and to 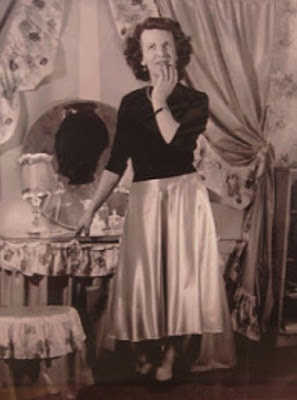 Bowman, who took on Prince as a patient.

From 1948 Louise worked with Alfred Kinsey.  Previously he was aware of only a handful of transvestites.  Louise introduced him to cross-dressers, professional female impersonators and eventually transsexuals.  She encouraged them to give their life histories to Kinsey. He paid her for typing up the life histories, and also for copying transvestite fiction, including petticoat punishment stories.  He asked her to “begin keeping a list of speciﬁc persons whom you know to be transvestites . . . [and] also of the cases you run across in the newspapers”; the lists, he hoped, could “give some clues to the number of transvestites”.  She listed 19 in the San Francisco area and 151 across the US.  Over several years she sent correspondence, her diary of her transition year (1944) scrapbooks of clippings and autobiographical writings.

Kinsey introduced her to Harry Benjamin.  Lawrence informed Benjamin of David Cauldwell’s earlier writings on transsexualism.  Benjamin began to introduce her to his trans patients, and she invited them to her home, and offered counseling.   The only prominant San Francisco trans person whom she avoided was Bunny Breckinridge.  His attention seeking was considered risky at a time when cross-dressing was still illegal.

In 1952 Virginia Prince, Louise, Edith Ferguson, Joan Thornton met and put out the first incarnation of Transvestia.  They used Lawrence’s address book for its initial subscription list.  The group discussed who was a transvestite.   Louise had written that the group includes "heterosexuals, there are definite fetishists, sadists, masochists, voyeurs, homosexuals, etc.".

A few years later Louise wrote: "I consider Louise to be my true identity even though the birth records say differently, and on this I will stand, for to me, as to most people who know me, I AM Louise. I maintain that people are personalities first and that the statistical facts are merely additional information." (Schaefer & Wheeler: 5)

When Virginia Prince revived Transvestia in 1959 with a more narrow definition of who was a transvestite, Louise was no longer involved.
Louise even put Arthur Corbett in touch with April Ashley.

In 1964, Louise, José Sarria and four homophile leaders met with religious leaders in San Francisco to organize for gay minorities.

Louise continued to send material to the Kinsey archives, even after the death of Alfred Kinsey in 1956.

There is now a Louise Lawrence Collection of letters, photographs and other documents in the Kinsey Institute in Bloomington, Indiana.

Louise and Virginia Prince were both born in 1912.

Louise is the real mother of organized transvestity in the US, and much more attention should be paid to her, rather than to Prince who does get the attention.
Time: 08:24