Gottfried von Bismarck was the second son of Ferdinand, the 4th Prince Bismarck.

Born in Belgium, he was raised on the family estate near Hamburg. He had a brief internship on the New York Stock Exchange, and then he attended Christ Church, Oxford University where he took a third in Philosophy, Politics and Economics.

He was a member of the Piers Gaveston Society which was noted for its rubber wear and whips. Bismarck also wore drag and makeup. He was noted for his charm and company whether in lederhosen or in female clothing. He did lots of alcohol and amphetamines.

At the end of final exams in 1986, Olivia Channon, the daughter of Paul Channon, a minis 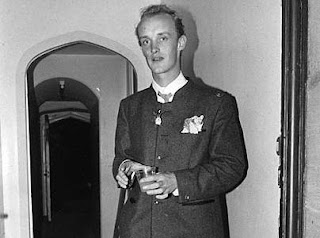 ter in Thatcher’s cabinet, was found dead from a heroin and alcohol overdose in Bismarck’s room. He was fined £80 for possessing amphetamines and his father recalled him to Germany. A family servant remained to settle his bills.

He did a Ph.D. on the East German telephone system, and oversaw the selling off of East German companies to private owners. Later he worked in Los Angeles raising money for Telemonde prior to its collapse. He returned to London and promoted holidays in Uzbekistan.

In 2007, at age 44, he died in his flat of a cocaine overdose. The pathologist said that he had never seen such a high level of cocaine in a body. Bismarck also had liver damage, hepatitis B & C, and was HIV +.