Simon Metz was born in the Yucatan, Mexico (although alternate accounts say that she was born in Santa Fe, N

As an adult she had no more than two ounces of brain. She was exhibited by P.T. Barnum as Maggie, the last of the Aztecs, based on a supposed Mayan tradition of binding the heads of their elite to achieve a cone shape. She was named Schlitze during a carnival in St Louis based on the beer company. After Athelia died, she was managed by showman George Surtees. The name on her California Death Certificate says Schiltze Surtees.

For most of her career Schiltze dressed and was exhibited as a girl supposedly because she was not toilet trained. She was the best known of the pinhead performers, and Norma Shearer and other Hollywood stars made a fuss of her. She did a few magic tricks, and danced a little. 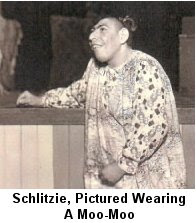 She appeared as a female pinhead in the movie Freaks, 1931, where the clown compliments her on her new dress. She played an animal hybrid in Island of Lost Souls, 1932, a vasectomy patient in Tomorrow’s Children, 1934, and Princess Betsy, the Bird Woman in Meet Boston Blackie, 1941.

When Surtees died in the late 1950s, his daughter placed Schlitze in a home, but she was rescued by the Canadian promoter, Sam Alexander, who took her back on the road.

She was the inspiration for Bill Griffith’s cartoon, Zippy the Pinhead.
She died of pneumonia at age 70.