Margaret Allen was born in Bolton, Lancashire, the twentieth of twenty-two children, and raised in Bacup. 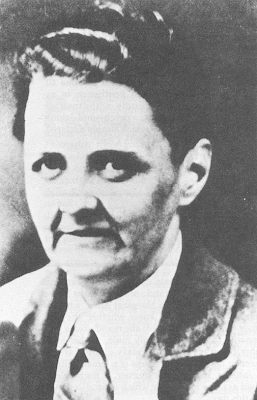 He dressed as a man, even in childhood. Other people referred to him as Bill, but usually shunned him except when he was buying drinks in the pub. He worked in the mills, and loaded coal.

In 1935 he had a mysterious stay in hospital, and afterwards claimed that he was now a man.

From 1942 to 1946 he worked as a bus conductor, a ‘clippie’ on the Rawtenstall buses, but was dismissed for pushing the passengers, and even cuffing them on the back of the head when they moved too slowly. He then moved to live in Bacup Rd, Rawtenstall in what had earlier been a police station.

In August 1948, Bill murdered Nancy Chadwick, an elderly eccentric neighbour who was believed to be a rich miser. He made himself obvious to the Lancashire C.I.D. and Scotland Yard officers, got under their feet and pointed out Chadwick’s missing handbag in the River Irwell behind his house. They searched his house and found bloodstains in the coal cellar. The defence counsel argued that Margaret passing herself off as Bill was a form of insanity.

He was hanged January 1949 at HMP Strangeways, the last trans person to be hanged in the UK.