Ernest Boulton was the scion of a family of Stockbrokers in the London suburb of Peckham.

He had shown an extraordinary aptitude for playing female characters - even from his sixth year. He often performed in private th 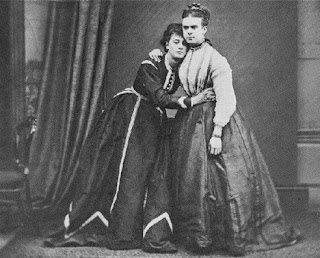 eatricals; the parts he assumed were always female, and his performances were always popular and successful. He also played the piano and sang excellently. He always had photographs taken.

When in his late teens, Ernest was introduced to Frederick William Park, who had similar interests, and they toured theatres as a double act using the female names: Stella Clinton, sometimes Mrs Graham, and Fanny Winifred Park. The reviews in the local papers were favourable. At one performance Stella received as many as fourteen bouquets. Both Stella and Fanny were frequently invited to supper at country houses after the show, and if requested went in their stage clothes. Local photographers pictured them for postcards which were in great demand. Stella was a pioneer of the new glamour drag.

When not touring they were frequently seen, dressed en femme, at such places as the Oxford and Cambridge Boat Race, the Surrey Theatre in Blackfriars Road (where the Royal Ophthalmic Hospital now stands), the Alhambra Theatre in Leicester Square, and the Burlington Arcade where higher-priced prostitutes were known to ply their trade.

A Hugh Mundell met both Boulton and Park, in male attire, at the Surrey and was convinced that they were women dressed as men. He gave them advice on how to be more convincing: they should swing their arms more. He met them again at the same theatre when they were dressed as women. He gave them a rose each. Stella passed him a note saying that they were men dressed as women. Hugh thought this a capital joke, and he and another man took the two women for a meal at the Globe, near the Haymarket.

Charles Reeves, superintendent of the Alhambra Theatre, where they frequently went over a period of three years, objected to their appearance and to the attention they attracted. He had them turned out more than once. 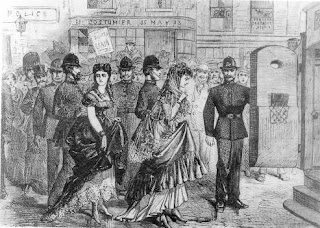 al occasions. On 28 April 1870 Chamberlain arrested them as they left the Haxell's Strand Hotel, where they had attended a ball organized by Amos Gibbings. They were taken to the Bow Street police station where the police surgeon examined their anuses for evidence of 'pedication'. They appeared the next day in magistrates' court dressed as they had been at the time of arrest. They were charged with 'conspiring and inciting persons to commit an unnatural offence'. The case came to trial in May of the next year.

In the interim, Lord Arthur Clinton, the third son of the fifth Duke of Newcastle, who was charged as an accessory, died at the age of thirty of scarlet fever aggravated by anxiety over the charge. The case was regarded as important. Both the Attorney General and the Solicitor General appeared for the prosecution. The 'unnatural offence', that is homosexuality, was not proved. Other than this, the prosecution was stuck for a crime. Dressing as a woman was not in itself a crime, and public mischief - a common charge against cross-dressers - would be no more than a misdemeanour. The jury returned after fifty-three minutes to declare the accused not guilty.

Both Boulton and Park left the country and continued their lifestyle in New York. Boulton appeared as Ernest Byne on the same bill in New York as the famed male-impersonator Annie Hindle and is regarded as a pioneer of glamour drag.  Park appeared as Fred Frinton, however without success, and he died at the young 5age of 33.

Stella and Fanny were featured in a survey of homosexuality published in 1881, The Sins of the Cities of the Plain.