René Rivera was a Puerto Rican New Yorker, born 1935, a drag performer, with a day job as a postal worker or maybe as 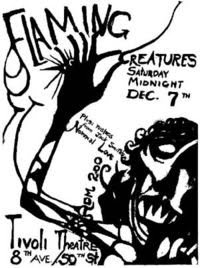 shipping clerk, who appeared in many New York under-ground films and avant-garde plays in the period 1963-6, working with the seminal directors of the genre: Jack Smith, Ron Rice, Bill Vehr, Charles Ludlam, Avery Willard and Andy Warhol. He designed and sewed most of his costumes, and often those of his co-actors.

He was cast-listed as Dolores Flores in Flaming Creatures, 1963, his debut, an underground film of an extended party on the roof of the Windsor cinema in New York's Lower East Side with lots of drag and nudity, and where Flores dances a fandango. The film became famous when New York City police seized the print at the premier.

He then became Mario Montez in homage to the 1940s film star, Maria Montez. Mario's characters were all much alike: flamboyant and narcissistic, and as the milieu was one where acting per se was suspect, Mario mainly played Mario - no matter the character's name. Th 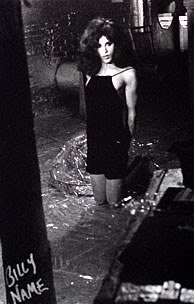 e distinction observed between cross-acting and androgynous characters loses its meaning in these films.

The only film where Mario is actually stated to be a 'man' is in Warhol's Screen Test Number 2, 1965, with Salvador Dalí and Lou Reed, where he is confronted about his gender and must admit that he is male, but he does so, he says, only because he is a woman. This was redone the next year on stage by the Ridiculous Theatre Company, again with Montez.

Mario was a guest performer singing "Diamonds are a Girl's Best Friend" in the seminal film The Queen, 1968, hosted by Jack Doroshow (Sabrina).

In  1977, René moved to Orlando, Florida where he worked in clerical jobs.   In 2006 he was featured in a documentary about filmmaker Jack Smith.  In the last few years of his life he again appeared in avant-garde films, and was honored:  March 2010, Montez was honored by Columbia University’s Center for the Study of Ethnicity and Race; February 2012, Montez was honored with the Special Teddy Award 2012 at the Berlinale for her outstanding role in underground film history.