Brian was raised in Rhode Island. When still a teenager she decided that she was a woman, and became Tish Gervais. 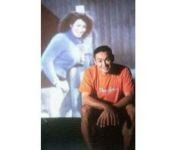 Still in Rhode Island, Tish married her boyfriend, Denny, and for five years lived as his wife on a US Army base in Germany, where she was the Tupperware representative.

When the marriage broke up, Tish was a model, a lounge, and then a disco singer. And finally a prostitute. She appears in Split: William to Chrysis: Portrait of a Drag Queen,1991, the documentary about International Chrysis, and in Silent Prey

, 1997, a thriller set in a convent school, as the Mother Superior.

She had never gone through with genital surgery, and in middle age decided to return to being a man. Brian turned his life into performance art in an Off-Broadway production in 2000, called Boys Don’t Wear Lipstick.

He is one of the contributors to Daylle Schwartz’s book, Straight Talk with Gay Guys: What Girlfriends Can't Tell You and Straight Men Won't