John Randell was born in Penarth, Glamorgan, Wales, and qualified as a doctor at the Welsh National School of Medicine in 1941. From 1942-6 he was a Surgeon Lieutenant in the Royal Naval Volunteer Reserve (RNVR), and then worked at Guy's, St George's and St Thomas's, all in London.

In 1950 he was appointed Physician for Psychological Medicine at Charing Cross Hospital. There he worked with Lennox Broster who had been treating intersexuals, since the 1930s, but not transsexuals as such. At the end of the 1950s he wrote a paper on 50 transvestites and transsexuals that he had worked with. In his 1960 MD thesis (Prifysgol Cymru/University of Wales) he discussed 61 mtf and 16 ftm cases. This was one of the first higher degree theses on transsexuality.

During the 1960s he was seeing 50 cases a year, which rose to nearly 200 in the 1970s. By his own figures, he saw 2438 patients (1768 mtf, 670 ftm). He also spent half his time with general psychiatric patients. In 1969, his name was mentioned several times in press reports about the First International Symposium on Gender Identity, and he testified at the Corbett vs Corbett trial that he ‘considered that the respondent (ie April Ashley) is properly classified as a male homosexual transsexualist', (which contributed to the legal problems of transsexuals and intersex persons in the UK for the next 35 years). 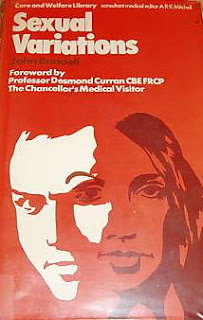 From this time on he was the ‘expert’ sought out by the media and appearing on the occasional radio programs. In 1980 the News of the World claimed that he and his surgeon, Peter Phillip, had made London the ‘sex-change capital of the world’. However Randell had not been in favour of surgery until his patients who had had surgery abroad returned with positive evaluations. Even in the 1960s less than 10% of his patients managed to achieve surgery and only a third of the mtfs of those had vaginoplasty. Even in the 1970s when numbers increased, still only 15% of patients achieved surgery.

However by then he was arguing that surgery could be appropriate and that psychotherapy did not work. Even then he restricted surgery to sane, intelligent, single and passable individuals. Passable implied conforming to Randell’s old-fashioned ideas of being ‘ladylike’, that many women had abandoned by the 1970s. Until the end he continued to refer to patients, including post-operatives, by the pronouns of their birth gender, and would tell an mtf accepted for surgery that ‘you’ll always be a man’.

Most patients describe him as brusque, rude and cold. However Tula found him to be ‘absolutely charming’ (perhaps because she passed so well).  He is the unnamed doctor in the Julia Grant television documentaries who shocked most reviewers by his attitude.

Randall is the doctor who told Christopher Wilson, the author of Dancing With The Devil: The Windsors

and Jimmy Donahue, that Wallis Simpson, the Duchess of Windsor, had Androgen Insensitivity Syndrome (AIS) = a woman with XY chromosomes.

Other patients include Mark Rees the town councillor, Rachael Padman the physicist, Alice Purnell the activist.

He died of a heart attack.

*Not the physicist nor the Conservative MP.