me Fernanda and to use the professional name Princesa. She emigrated to Italy in 1988 to earn money as a prostitute and buy a sex-change operation.

In 1990 Fernanda was convicted of the attempted murder of a woman who had stolen her money, and in Rome’s Rebibbia prison she met Maurizio Jannelli of the revolutionary Brigate Rosse who worked with her to write her autobiography, which was published in 1994 in Italy, and in Brazil in 1995.

Princesa became the most celebrated transsexual in Italian song when Fabrizio De André (1940-1999) sang about her on the album Anime Salve, 1995. Listen to part of it here.

The autobiography was picked up by film director Henrique Goldman. She worked with him on pre-production, but committed suicide before filming started. 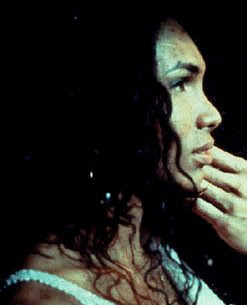 Souza was born in Belem Do Para in the Brazilian Amazon, and like Fernanda emigrated to Italy. She was found by Goldman while praying in Milan’s Duomo cathedral, where he was scouting locations. She became one of very few transsexual actors to play a transsexual lead role when she starred in the film Princesa, 2001.

However the film ignores the time in prison and the suicide, and adds a plot about a john, Gianna, a lawyer, who at first is freaked out by her extra equipment, but falls for her, and leaves his wife to live with her.

Ingrid never played in any other film.