Raymond did a BA in English Literature at Salve Regina College, 1965, and an MA in Religious Studies at Andover Newton Theological School, 1971. She was then for a short time a member of the Sisters of Mercy, but left and did a PhD in Ethics and Society at Boston College, 1977. Raymond’s PhD thesis supervisor was Mary Daly of Boston College. Daly was writing Gyn/Ecology at the same time. Raymond’s dissertation became The Transsexual Empire, 1979, and it and Gyn/Ecology cite each other, and both were published by Beacon Press which is associated with the Unitarian Church. In 1978, Raymond became Professor of Women’s Studies and Medical Ethics at the University of Massachusetts at Amherst. 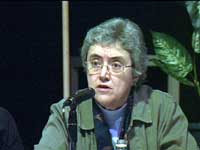 Raymond’s position is that transsexual women are not women, and she uses male pronouns for trans women throughout. The Transsexual Empire enthusiastically draws on Thomas Kando’s Sex Change; The Achievement of Gender Identity Among Feminized Transsexuals, 1972, and on Jan Morris’ Conundrum, 1974. Kando restricted his sample to recently-transitioned transsexuals, and Morris wrote within two years of surgery, and so Raymond was easily able to find examples of the gender enthusiasm of new women which she insisted was typical of transsexual women of whatever duration. Raymond says that she supplemented these with 13 direct interviews and found highly stereotypical notions of gender roles, and without the “role strain of normal women”. However Angela Douglas claimed that all the quotes from these 13 are in fact from a letter that Douglas wrote to Raymond. Raymond retells several of the transsexual tales that were in the US press in the 1970s: Angela Douglas’ notorious polemical letter that was a reaction to lesbian separatism; the fuss that some lesbians made about Sandy Stone being the sound engineer at the feminist Olivia Records; Paula Grossman being fired.

She takes the position that sex is determined by the chromosomes and that if XY one is always male, and if XX always female, and secondly that the historical experience of being raised as a girl and menstruating determines a woman. A constructed-woman has only a history of wishing to be a woman. The primary cause of transsexualism is the sex stereotyping of patriarchal society (no biological, psychological or existential causation is considered), and the secondary cause is the professionals, the surgeons, psychiatrists, counselors, electrologists etc who provide services and persuade foolish persons to change (the opposition of the vast majority of male doctors to the first transsexuals is not considered). She never considers that transsexuals themselves regarded the gender-stereotyped requirements of the gender clinics as a problem. Transsexual men are “the tokens that save face for the transsexual empire”, and are barely considered. The patriarchy has introduced sex changes as a means of controlling gender stereotypes, which act in the interests of men. Once extra-natal conception is introduced, biological women will become redundant.


“All transsexuals rape women’s bodies by reducing the real female form to an artefact, and appropriating this body for themselves. [...] Transsexuals merely cut off the most obvious means of invading women, so that they seem non-invasive”.

In various places she compares gender surgery to foot-binding, clitoridectomy and infibulation, corset mutilation, unnecessary hysterectomies and radical mastectomies. Several times she suggests but just stops short of saying that transsexuality was associated with the Nazis, and the death camps.

Whilst Raymond maintains that male-to-constructed-females are more gender stereotyped than biological woman, worse still are those who attempt to be lesbian-feminists:


"Transsexually constructed lesbian-feminists show yet another face of patriarchy. As the male-to-constructed-female transsexual exhibits the attempt to possess women in a bodily sense while acting out the images into which men have molded women, the male-to-constructed-female who claims to be a lesbian-feminist attempts to possess women at a deeper level, this time under the guise of challenging rather than conforming to the role and behavior of stereotyped femininity”.


“I contend that the problem with transsexualism would best be served by morally mandating it out of existence” .

The book was endorsed in a review by Thomas Szasz which is quoted on both its front and back covers (“Raymond’s development and documentation is flawless”).

Raymond also wrote a paper, Social and Ethical Aspects of Transsexual Surgery, for the US Government. This paper, which is less contentious and inflammatory in its language and thus more superficially plausible, resulted in the removal of US federal and some state aid for indigent and imprisoned transsexuals, and provided an example for insurance companies who were pleased to have a feminist telling them that transsexuality should not be covered. This non-coverage included breast or genital cancer where it could be deemed to be a consequence of transsexual activity.

Carol Riddell wrote the first detailed and critical review of Raymond’s book, and it has been frequently reprinted, which I have drawn upon above.

Through the 1980s gay academics endorsed Raymond’s book. It was admired by Wayne Dynes (“Impassioned radical-feminist critique”) and Jonathan Katz (“The most profound, extended critique of the medical concept of ‘transsexualism’ ”).   Liz Hodgkinson’s Bodyshock: The Truth About Changing Sex, 1987, while being pro-transsexuals, repeatedly returns to Raymond’s book for explanation.

Along with Peter Ackroyd’s Dressing Up, also 1979, Raymond’s book became a de rigueur entry in the bibliography of any 1980s book on trans topics, even though many authors did not actually seem to understand what she was saying.

In 1988, Sandy Stone wrote a manifesto defiantly responding to Raymond.

Raymond’s books in the early 1990s attacked sexual liberalism, contraception in the form of RU486, and the new reproductive technologies.

In 1996, The Transsexual Empire was reissued by Teacher College Press, without any changes although by that time the excessive gender conformity required by gender clinics that she had initially criticized was largely a thing of the past. She expands her criticism in the new Introduction using the new word, ‘transgenderism’, she dismisses gender transgression as a new type of gender conformity, and has specific criticisms of RuPaul, Leslie Feinberg and k.d. lang. So non-surgical gender solutions are not acceptable either as some might have assumed from her book.

In the late 1990s and 2000s there have been a number of trans writers who have used Raymond’s book as if it referred to other transsexuals whom they don’t seem to like, often referred to as ‘autogynephiles’ or ‘transgender’ or ‘men’, although there is no basis for this in Raymond’s writings: she is as critical of the lesbian-feminist constructed female as she is of the gender-stereotyped constructed female. Notable examples are by Margaret O’Hartigan and Cathryn Platine.

From 1994-2007 Raymond was the Co-Executive Director of the Coalition Against Trafficking in Women (CATW) and is still on the Board. She retired as a professor in 2002, and is Professor Emerita. In CATW she is strongly against decriminalization of prostitution which has led several sex worker activists to take issue with her. She talks about prostitution as if trans women and men are never sex workers.

Raymond has kept her personal life quiet.   Her Wikipedia page has a ‘personal life’ section which says that she is a former Catholic and an open lesbian.  There is no mention of her having a wife.  There are two rumours relating to her private life.  I did not include them above because I could not confirm them, but they are very germane to her writings:  that she had a passion for a trans woman but was rebuffed (Denny, 2002);  and that she and Daly were lovers.  Both suggestions partially explain the intensity of her transphobia.

My husband was raised a Catholic and is a graduate of the Jesuit Boston College.  On reading this, his major comment was to explain that many ex-Catholics and lapsed Catholics emphasize the one issue that affects them personally – with Raymond it is the non-ordination of women ( Johnson, 1973) – but continue to agree with the Church on other issues.  Raymond’s position is remarkably congruent with the Church of Rome:  trans woman are not women; abortion is wrong; the new reproductive technologies are wrong.

For all her concern with the “role strain of normal women”, Raymond is indifferent to the role strain of those born male.  Other than feminist  consciousness raising, she rules out – this is made clear in the introduction to the 1994 reprint - any solution that such male-born persons may wish to try: in addition to her proscription of surgical gender change, she also condemns androgynous gender mixing for both men and women.  She denies that women wearing trousers is transvestity  and at the same time denies men any clothing freedom at all.    Like Virginia Prince and some of the HBS people she is insistent that other persons should follow her prescription only and is not interested in what they might think, or in allowing them to be themselves.

I am a woman, therefore I am a feminist.  This is so obvious to  me.  The great expansion of opportunities and freedoms for all women, trans and cis, over the last 50 years is one of the great achievements of the 20th century.  Raymond attempts to present her flavour of feminism as Feminism, as if there were no others.  But of course there are many feminisms.  One of the best statements of how Raymond is an embarrassment to feminism is found in Califia’s book.   As a feminist I also find Raymond embarrassing.  But there are also trans women who say things that I do not like.
Time: 12:20