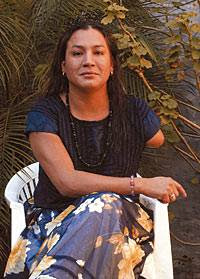 Spirit, she took the name, Amaranta, during adolescence inspired by the character in Gabriel Márquez’s novel 100 years of Solitude.

She studied language and theatre at Veracruz University. She speaks Zapotec and Spanish. She then toured southern Mexico as a travésti performer.

She is an HIV/AIDS activist who has won international grants to further her work with the Muxhe community and with migrant women.

She lost an arm in a bus crash in 2002. She is a co-founder of Mexico Possible party, and was its candidate for Federal Deputy in 2003, that is, she was the first transgender Mexican to run for office.