A Review of Darryl Hill's Trans Toronto: An Oral History

Darryl Hill did his BA and MA at the University of Saskatchewen, and his PhD at the University of Windsor. He was for a while in the Psychology Department at Concordia University, where he would have met Vivian Namaste.  He is now an Associate Professor in the Psychology Department at the College of Staten Island, which is part of the City University of New York.  He is also a co-founder of TransNYC.  He has previously published a paper, "Sexuality and gender in Hirschfeld’s ‘Die Transvestiten’: A case of the 'Elusive evidence of the ordinary.' ". Journal of the History of Sexuality, 14, 2005, 316-332, which points out that the distinction in his work between homosexual and transvestite is less sure than generally assumed. 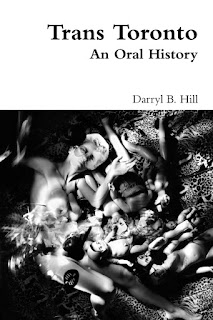 
In 1996-7 and again in 1999-2000 Hill interviewed a variety of trans people in Toronto, 28 in all.  However despite the book's title this is not simply an oral history of being trans in Toronto.  The final paragraph of the book is a summation: "A new model of gender generalisable beyond trans-identified people presents challenges, but I have found that postmodern feminist queer theory offers a compelling proposal for gender in the postmodern context, assertions widely supported by the life stories of some trans Torontonians at the start of the 21st century".

He tells us (p12) that "Many interviewees had questions about me (e.g. What's a straight guy from Saskatchewan doing interviewing trans people?), my goals for this research (e.g. Was I seeking, like some psychologists, to pathologise trans people?), my gender (Was I a female-to-male transsexual?) and so on.  When they asked questions, I was open and honest."   Except that he does not tell us, the readers, what answers he gave to those questions.

The book really does need to have 'postmodern' in its title.  I imagine that there will be three kinds of reader:


1) those of the postmodern persuation.  Even these I think will find the 50 (out of 180) or so pages explaining postmodern theory to be a bit much, as presumably they already know it.
2) those unpersuaded by postmodernism.   I suspect that many of these will give up once they hit the heavy theory section starting in chapter 3.
3) those who want a history of trans Toronto, for there is no other book on the topic.  By a mixture of skipping and using the index these readers will find the bits of interest.

This book would be much more readable if the theory sections had been moved to an appendix.  The major history discussion does not happen until chapter 8, after the theory chapters.  Fortunately the postmodern sensibility as it has seeped into public consciousness has removed the obligation that people used to feel that a book should be read sequentially.

Let us return to the 28 interviewees.  They are referred to only by first names or pseudonyms for obvious reasons of confidentiality.  However Darryl does taunt us a bit on that.  He tells us (p93) that Laura, Sarah and BC "were a significant presence on the Internet: they each had popular and widely accessed web pages dedicated to some aspect of trans life", and that (p161) "one narrator had been a leader in trans politics, truly a leader, but had since been keeping a lower profile and was not currently involved in any political project."   I  had previously visited BC's web page, and so recognized her non-standard name immediately.

Another of the 28 used the very unusual spelling Miqqi.  Google 'Miqqi' - simply that even without any extra words like 'transgender' and you immediately find the web page of Micheal Gilbert who is a professor at York University, Toronto and, as Miqqi Alicia, an open tranvestite who has been profiled as such in Toronto Life, has written for Transgender Tapestry and is a frequent participant at Fantasia Fair.  The index has an entry for each of the 28 interviewees, and therefore an entry for Miqqi.  However it also has an entry for Michael Gilbert.  It is never admitted that they are the same person.  In addition Hill mentions Xpressions (p27), a transvestite social group, without mentioning that Miqqi is active in it.    And further (p9) he mentions that he met a key informant at an academic conference - at a guess this is Miqqi again.   While I am open to the Buddhist-postmodernist notion that the unitary self is a delusion, to split a single person into parts like this is misleading.

There are no sketches of each of the 28.  Apart from Miqqi, I was unable to develop any feeling for them as individuals.   As I said, there are index entries for them which enable you to flip and read all the comments from a single person, but this is awkward at best.  They are quoted in response to aspects of theory, sometimes supporting it, sometimes questioning it.  On page 5, Hill mentioned that Namaste had rightly argued - in particular against Garber -  that trans persons are more than literary devices illustrating the the crisis of gender through discursive perfomatives.  Likewise they are more than talking heads to be juxaposed against theory points.  Without a proper sketch of each of the interviewees, it is not really fair to describe what Hill is doing as 'oral history'.

The book contains a short account of Toronto trans history before 1995, when Hill began his interviews.

was a student in Toronto and socializing with John Herbert Brundage.  The periodical Justice Weekly, which was published in Toronto, acted as a contact point for closeted transvestites. The transsexual, Dianna Boileau, was dramatically outed after a car accident, and later became the first transsexual accepted for surgery at the Clarke Institute Gender Identity Clinic.  Nor is there mention of Betty Steiner who became the first head of the Clinic when it was founded in 1969.

Rupert Raj, founder of FACT, Metamorphosis Medical Research Foundation etc is very ill-served by being reduced to one factually-incorrect sentence: "Rupert Raj, who was active in in the Calgary-based FACT between 1982 and and 1988, went on to cofound (with Mirah-Soleil Ross) the Meal Trans program in 1999)" (p150).  On the previous page Hill had told us that "the Foundation for the Advancement of Canadian Transsexuals (FACT) [was] also known as the Federation of American and Canadian Transsexuals".  This really won't do.  Rupert moved to Toronto from Calgary in 1979 which therefore became the base location of FACT.   In 1982 he permitted Susan Huxford (not mentioned anywhere in Hill's book) to take over FACT.   Huxford renamed FACT as the Federation of American and Canadian Transsexuals as there was a branch in the US.

Two paragraphs later Hill is telling us that "By the late 1980s, the main newsletter was Transition Support News".  His removal of Huxford from the story creates more problems.  In 1986 both FACT-Toronto and FACT-Hamilton rebelled against Huxford's authoritanism (much as FPE Alpha Chapter had rebelled against Virginia Prince in 1974).  The Toronto chapter reconstituted itself as Transition Support, and has continued with name changes and is still going.

The in-between paragraph tells us: "In July 1979, a group claiming to be Ontario's only group for 'TV/TS' produced their first newsletter, Skirting the Issue".  The group was the short-lived Transvestites in Toronto, a social group.  Why doesn't Hill name the group? Is he being prudish about its acronym?

Hill does not mention that FACT-Toronto had a member who is world-famous for her sporting achievements: Michelle Duff.  Nor does he mention the Toronto performers such as Craig Russell, Rusty Ryan, Michelle DuBarry (who did attend a few meetings of Transvestites in Toronto), nor the musicans Barbra Amesbury and Toby Dancer (whom the Ontario trans rights bill was named after).

Unlike the chapter in Namaste's book which discusses the Clarke Institute Gender Identity Clinic but says not a word about autogynephila, Hill does quickly summarize it (139) and ask his interviewees what they think about it.  There is no mention at all about Kurt Freund, its inventor and Ray Blanchard is referred to only by his surname, and only his late 2005 paper is listed.  Michael Bailey is not mentioned but Alice Dreger's defence of Bailey is.  Of the transsexuals who embraced the concept, Anne Lawrence in the US is mentioned, but the major Canadian who did so, Willow Arune, is not.  Nor is there any mention that the Clarke Gender Clinic is the only clinic in the world where a staff member has also changed gender: Maxine Petersen. There have been extensive discussions of the Clarke Institite (later called CAMH) and autogynephilia on this site, on BC's site, on TS Roadmap and on Lynn Conway's site.  As Hill's account is so short it would help if he referred his readers to these sources.

On p67 Hill cites Docter and Prince in successive sentences as both regarding the sex-gender syster as binary.   Surely he should have mentioned that they were personal friends and therefore this does not count as two independent researchers coming to the same conclusion.

In the 1980s one of the most dispiriting aspects about reading books on transgender was that almost all of them cited Janice Raymond, even for small details.  One would have thought, at least hoped, that that was bygone.  But she is cited 4 times in this book without any warning that her book is a transphobic tirade which does not attempt to be objective in either a modern or a postmodern sense.   If Hill did not figure that out himself, surely some of the 28 interviewees pointed it out.   Also Raymond is not a postmodernist.  She is not only an unreconstructed essentialist, her positions in all her books are fully compatible with the doctrines of the Holy See.  This is not a minor point.  After all the damage that Raymond did, the many who died because her advocacy denied them needed medical care, it matters that we should stand up and call out any who purport to be pro-trans and yet uncritically cite Raymond.

Most of the deficiencies in Hill's knowledge of the history of trans in Toronto could have been fixed by perusing this site.  Should I take umbrage that he declined to do so?  From internal evidence it is apparent that he wrote the first draft in his book at the beginning of the 2000s, years before this site existed.  However he revised it later for publication in 2012 - see the (very small number of) items in his bibliography with dates in the last five years.

What you think of this book will depend on where you situate yourself with regard to postmodernism.  I have flirted with it, mainly in the 1990s.  People do tell me that some of my positions are definitely postmodern, and I don't mind being labelled so.  However I have generally been quite disappointed by postmodernist book on trans topics.  Other examples are by Namaste and Ekins (not mentioned at all by Hill).  To do postmodernist theorizing (or theorizing for any other school) it is necessary to get the facts fairly close to being right, and Hill, Namaste and Ekins have come up short on this criterion.

Unfortunately we do not yet have a history of trans in Toronto, or even in Canada.  This is much needed.  Hill's book is inevitably going to attract readers looking for such a book, and unfortunately they will have to plough through a long theory section, or practice their skipping skills.
Time: 17:27