With Kristen Worley, Michelle Dumaresq and Alana Hardie, Canada is becoming known for its transgender sportspersons. But the grandmother of them all is Michelle Duff who won the Belgian Motorcycle Grand Prix in 1964 before the others were even born.
____________________

Michael Alan Duff was born in Toronto. He was a competitive motorcycle racer 1955-69, mainly on the European Grand Prix circuits.

In 1963 he married a Finnish woman and had a son with her the same year, and daughter two years 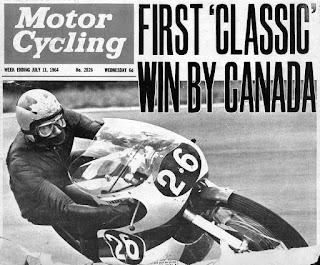 later. In 1964-5, he rode under contract for Yahama. He won the Belgian Grand Prix 1964 at a record average speed. In 1965 he broke his pelvis and left hip joint during testing and was six months in hospital.

In 1967 he stopped professional racing, separated from his wife, and moved to California to become an associate editor of Cycle World. He still did some racing, and in 1969 won the Eastern Canadian Championship. From 1970-8 he ran a Yamaha dealership. He also remarried and had another son. From 1978-84 he worked doing specialized machine-shop work in the Greater Toronto area.

In 1984 Michael became Michelle and commenced transition. She separated from her wife, moved to down-town Toronto to start living as a woman, and became involved with the transsexual group FACT-Toronto. She completed transitioned in 1987: surgeon Michel Seghers in Brussels. 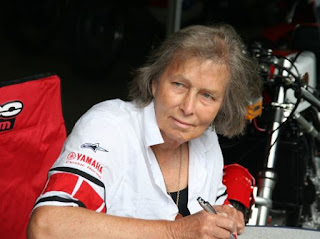 She published her autobiography in 1999, and in 2000 moved to an isolated cottage in central Ontario. She is also a photographer and writer of children’s fiction. In 2009 she published two young-adult titles about animals.

*Not Michael Duff the physicist, nor the Northern Ireland footballer, nor the baronet, nor the New Zealand journalist.
EN.WIKIPEDIA   CANADIAN MOTORCYCLE HALL OF FAME