John Brundage was raised in Toronto. He was writing fiction from the age of 14.

By 18 he was a accomplished drag queen. He was able to pass as a female model at a fashion show. However his male persona was obviously gay, and was subjected to taunts and jeers.

In 1947 John was mugged, and his attackers accused him to the police as trying to hustle them. It was Brundage was was charged, convicted and sent to Guelph Reformatory for six months. There he was beaten and raped, but he was also able to wear drag and curl his hair. On release he continued in drag. However a few years later he was recognized by one of the cops who had arrested him before. This time he was sent to the Mimico Reformatory.

In 1953 John toured Canada as a female impersonator with Allan Maloney in Paris After Midnight.

He then attended both ballet and theatre school. He decided on the theatre. He used his middle name as one of his sisters was also in theatre. In the 1960s John Herbert was artistic director of three Toronto companies in succession.

For Halloween 1962, John joined Katherine Cummings and others to run the spectator gauntlet into Letros Tavern for its annual drag event. 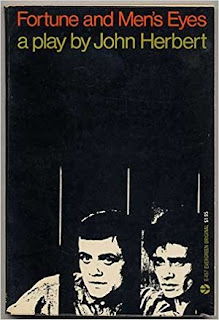 In 1964, Canada's centennial year, Herbert wrote Fortune and Men's Eyes, based on his two terms in Stratford Festival, but then forbidden by the Board of Directors for public performance, although it was performed privately for the Stratford actors. Herbert produced and directed Jean Genet’s The Maids. This was the first Genet play in Toronto. Critic Nathan Cohen of the Toronto Star attended, and later sent Fortune and Men's Eyes to David Rothenberg in New York.
prison. It was rejected by the Toronto Workshop Productions. It was announced for the 1965

Rothenberg opened the play Off-Broadway and it ran for a year. This was two years before homosexuality was decriminalized in Canada, and two years before Stonewall. The play was performed to great acclaim, but also controversy, in Los Angeles, London and Paris. It was filmed by MGM in 1970 in a former Quebec City prison with US actors.

Also that year, John was at the televised opening of Toronto's new St Lawrence Centre, in drag of course. He was pissed off that a government-subsidized theatre had opened with a shallow US comedy (Jean Kerr’s Mary, Mary). He was asked on television what he thought of the play, and dismissed it as "dreadful!".

The film version of Fortune and Men's Eyes came out in to great success in 1971.

In 1998, Herbert wrote Marlene Richdiet, a comic monologue in one act about a drag artiste coming to terms with middle-age and food. He wrote 24 plays in total, of which half reached some degree of production.