Russel Alldread was born in Bowmanville, Ontario. His boy soprano won him first prize a 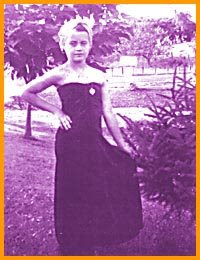 He did his first drag on his uncle’s farm at age 9. His high school years were filled with operettas and stage shows. With a friend he attended a school dance in drag.

His first job was at General Motors. His first relationship which lasted three years was with Stanley St John, the Toronto orchestra leader. He left to marry a woman, and for a job as a ladies shoe salesman. They married in 1957, Russel gave away all his femme stuff, and his drag mentor, Murray Burbidge made the bride’s gown. The wife left him for another man.

From the early 1960s drag shows were being put on in Toronto coffee houses.  Murray Burbidge was one of the first to perform in full drag, and made Russel his first dress. Russel’s first stage name was Anita Modé. By 1969, he formed a touring group, Phase One, with Lonny Roberts and Jamie Durette. They renamed her Michelle (to be orally gender neutral) and DuBarry (from the 1943 film, Du Barry Was a Lady).

Roberts and Durette moved to Vancouver, and DuBarry formed a new troupe with Rusty Ryan and Tammy Autumn as The Great Impostors, which toured Canada in the 1970s and 1980s.

Michelle is an active member of the Trillium Monarchist Society: in 1992, she was crowned Empress VI of Toronto. She had a cameo in the film Fluff, 2003, and was Grand Marshall at Toronto’s Pride Parade 2007.

In 2015, Michelle was proclaimed the Oldest Performing Drag Queen by the Guinness Book of Records.