++ updated November 2013 to include the stained window.

Adrian Chornowol grew up in Edmonton, Alberta. His Ukrainian-born father was a musician with the Edmonton Symphony Orchestra. Adrian was a child prodigy who played classical piano in the window of the Harmony Kids store. He grew up to be a record producer of note.

He was the music director of a country music television program, where he met Ian Tyson, who credits Chornowol with creating a unique sound for his platinum album Cowboyography, recorded in Calgary in 1987.

In 1989 Chornowol was repeatedly stabbed in his home by two homeless aboriginals. Shortly 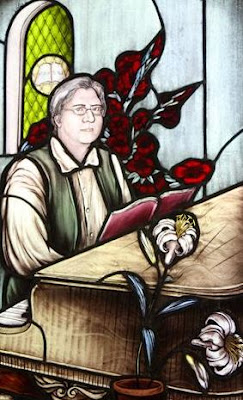 afterwards he moved to Vancouver, and as Toby Dancer attempted to transition, as her brother had already done. She was very lonely and succumbed to heroin and then morphine.

Toby drifted to Toronto in 1998. She found the Parkdale Activity Recreation Centre, and a worker there found her a room. She sometimes played the piano, but needed coaxing. Zepheniah James, from Jamaica via New York, brother of the late Philip James of the Blues Busters, taught music at the Centre and slowly got Toby to play with him. They recorded two CDs. Toby also contributed to the music at Emmanuel Howard Park United Church, and confided in the minister Cheri DiNovo, who is now a New Democrat Member of the Provincial Parliament.  Emmanuel Howard Park United Church now has a stained window to remember her.

Toby died at age 51 of a drug overdose.

For somebody who made such a mark on Canadian music, Toby has a very small imprint:  Merely a paragraph in Tyson's book, and the obituary in The Toronto Star.  If you google Adrian Chornowol you find entries in Music databases, but they are no more than the name and sometimes a list of albums.

Email ThisBlogThis!Share to TwitterShare to FacebookShare to Pinterest
Labels: both siblings, musician, television