Russell Craig Eadie, aka Craig Hurst, was born in tiny Port Perry, (map)Ontario. His parents divorced when he was 9. 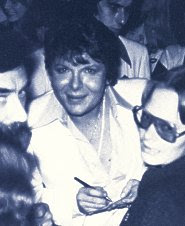 In his teen years he founded the International Mae West Fan Club and on the basis of that was invited by Mae West to become her personal secretary. She fired him when she caught him trying on her clothes and makeup.

Back in Toronto Craig finished high school, worked as a typist and hairdresser, changed his name to Russell and started building a career as a drag artiste who used his own voice - one of the last to do so. He also helped Rusty Ryan to get started as a drag artist. Craig had a three-octave vocal range and could impersonate Barbra Streisand in her own key. He could perform a duet between Ella Fitzgerald and Louis Armstrong.

He became friends with a schizophrenic writer, Margaret Gi 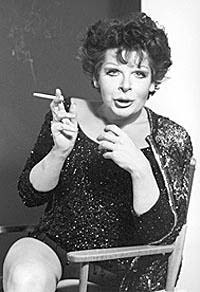 bson, and for a time shared an apartment with her. In 1976 Gibson published a collection of short stories, The Butterfly Ward, which includes ‘Making It' about Liza, a pregnant schizophrenic in Toronto and her exchange of letters with Robin, a rising female impersonator. The collection was much praised and the story ‘Making It' was expanded in 1977 into the film Outrageous!, although the focus of the story was shifted to Robin.

The film was a great success and made Russell into the star he wanted to be. This film was the first commercial success to have a gay character played by a gay actor. He was voted Best Actor at the Berlin festival. At the Virgin Islands festival Russell was voted both Best Actor and Best Actress. The film contains Russell's impersonation of Mae West, and this, combined with West's own film, Sextette, bombing at the time, lead to a final break between the two of them.

The follow-up film, Too Outrageous! was not made until 1987, and quickly died without a trace. 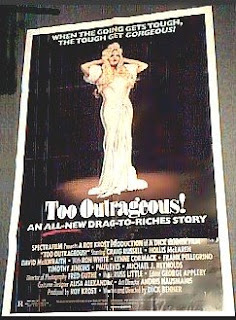 As Mae West died three years after her final bomb, so did Craig Russell after his.

In 1992 Margaret Gibson published another collection of short stories, Sweet Poison, one of which is ‘Golden Boy' where the drag performer is now called Phineas and the writer friend Meg. He had once starred in a film based on her life for which she received only $2,000 and almost no credit. Phineas has changed and become mean and violent.

Although openly gay, Russell married one of his female fans, Lori Jenkins, in 1982. He had also fathered a daughter in 1973. He died of a stroke related to AIDS.