"1978, when Kane introduced Prince to the word 'transgender', was early enough that if Prince had had the gumption and the resourcefulness she could have taken the word and made it hers." 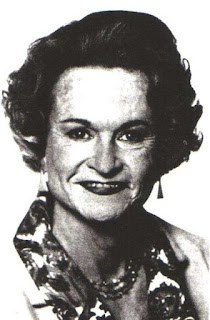 When to use female pronouns? Wikipedia and Ekins follow the confusing convention that the pronouns of a person's final gender should be retrojected to childhood and even birth. The not-TG people and Patricia Califia - who claim to follow that same convention - somehow deny Prince all female pronouns, some just to Prince and others to all non-op trans women. This is despite the obvious fact that Prince had a female gender identity before puberty. However she did not become a full-time woman until 1968. Like the rest of us, Prince had more than one persona. Much clarity is gained when Arnold, Muriel and Virginia are used to signify which aspect is doing what. Virginia did not do a pharmacology PhD, write Chemistry in Your Beauty Shop and marry two wives; Arnold did.

The US state of Virginia has three counties with Prince in the name: Prince Edward, Prince George and Prince William. This does make it difficult to google "Virginia Prince".

In the decades before Stonewall there were silly laws and there were draconian laws. People, gay, trans, lesbian were irritated by those laws, were harassed by them, they were sometimes arrested, less often jailed, and more often lost their jobs. Virginia Prince hobnobbed with the gay and lesbian organizations, with the Mattachine Society and the Daughters of Bilitis. But she told the members of FPE and she told the police officers that FPE was not not gay, it was not fetishistic, it was not gender variant, and its members did not seek surgical transformation. We are different from people like that. Yes some members of the Mattachine Society were into a similar sense of false respectability, and emphasized that they were not transvestites. But in both cases saying we are different, there is always an unspoken 'jail them, but please not us'.

Was Prince a transvestite activist? Obviously not. I showed this by listing individuals who could be regarded as transvestites who were not supported. Felicity Chandelle stands out as an exception. Comptons Cafeteria, the Black Cat police riot, Sir Lady Java – Prince was not interested. Even Mauricio Archibald, where the charge was identical to that against Felicity, and where an appeal had been secured, Prince was not interested. When she spoke to police officers she always emphasized that her members were different from street transvestites.

Was Prince a transgender activist? Even less so. Non-femmiphilic transvestites were banned from FPE. Also banned were drag queens, all gender queers, all transsexuals, and most non-ops. Prince had transsexual friends. There is no record that she had any transgender friends. Nor did she she seek to co-ordinate or ally of her own accord with any transgender groups. IFGE did ally with various types of transgender groups, as did Leslie Feinberg. Feinberg and IFGE used Prince's name in proclaiming transgender umbrellas but Prince continued to write mean-spirited articles complaining about the umbrellas. In short she was transgenderphobic.

Likewise the list of the original 12 members of the Hose and Heel Club is still a secret 50 odd years later. Are the names not in the papers left to either Rikki Swin or to Northridge University? Docter tells us that one member was a dress maker and that the second meeting was at his house. Darrell Raynor tells us that Robert Stevens/Barbara Ellen and Evelyn fell out with Prince late 1962 or early 1963. Presumably they were in the original group, but we know nothing about them other than what is in Raynor's book.

It occurs to me that the surviving members of the Alpha Chapter might tell a rather different account, but with the exception of JJ Allen they have not done so. I was able to find so much more about the New York chapter. I can work only from published accounts.

Prince's quest was a quixotic one. She took the example of the femmiphilic and presented it as the ideal type of transvestite person, and that the membership of FPE was the universe of cross dressers. To do this she had to construct three dams of exclusion that were forever disintegrating.

a) Fetishism. Hirschfeld subtitled his 1910 book: The Transvestites: The Erotic Drive to Cross-Dress, and Psychoanalysts spent most of the last century developing the idea that transvestism is fetishistic. Quite reasonably Prince reacted against this. In addition, in the early days of Transvestia Prince had to be careful or else the magazine would have been banned by the US Post Office. This meant not only excluding discussions of eroticism, but also forced-femininity and petticoat-punishment fantasies. Nan Gilbert, a publisher of petticoat-punishment fantasies had had his mail stopped and was fined $500 in 1960. So it is certainly intriguing that Issues 1, 2 and 4 of Transvestia featured William Bessie Beck, the legendary recipient of petticoat-punishment whose amazing tale has now been published by Peter Farrer. What should we make of the fiction titles: From Martin to Marion, The Turnabout Party and The Birth of Barbara? They were published by Chevalier Publications, and advertised at the back of How to be a Woman Though Male. Amazon lists the author as "Anonymous (Virginia Prince?)". In fact the first draft of most of these fictions were published in Transvestia. Then there is Sandy Thomas, apparently a long-time friend of Prince. Thomas is the author of lots and lots of transvestite fiction. In the mid-1990s Prince sold the copyright of her major books and of Transvestia to Thomas who has reprinted them on his own imprint and listed them under his own name. Both the original Prince books and the Thomas-authored books are now available together on Lulu.com.

b) Transsexuality. Prince had an initial enthusiasm for transgender surgery, as we saw above. There are rumors that she even applied to be accepted in the Stanford University program (although she had been in Los Angeles earlier at the right time for Elmer Belt's program at UCLA Medical School). However Prince completely denied that rumor. She decided against surgery, as did Yvonne Sinclair, Nicole Murray Ramirez and Leslie Feinberg, but of these only Prince then came down heavy on others who were considering surgery (other changebacks who are more like Prince in wanting to ban gender surgery include Charles Kane, Gerry Leach and Alan Finch). One of the first to receive this negative message was the teenage Diane Kearny who naively wrote to Prince and was told that she was ‘delusional’ in wanting such. Words such as 'mean-spirited' and 'bullying' have been used to describe Prince's antagonism to other people's possible surgery. A typical example was Mary who was Prince's assistant in 1967 and who had originally thought that she would seek surgery. On the other hand, in the period just before Doreen's departure, Prince was friends with Sherry, a post-operative. They would go to dances as two women, and Doreen was stressed that Prince would follow in Sherry's footsteps. In 1979 Prince wrote: "Although I personally try to dissuade people from having the surgery, except in special cases, it is interesting that three of my best girl friends are former men who have had the surgery". Docter (p58) says: "Over the years, Virginia has been very outspoken and dogmatic in her opposition in presenting her opposition to surgical sex reassignment, often going well beyond the simple expression of a personal preference and more into the mode of conducting an ideological campaign. Let's just say she has not shown much acceptance of contrasting opinions on this topic, and it has cost her some friends. But as strong as her views on this may be, she has sustained many close friendships with transgender women who elected to proceed with surgery." Despite her statements, there was a steady loss of FPE-Tri-Ess members to surgery.

c) Homosexuality. In The Transvestite and His Wife, Prince wrote "The femmiphile adopts feminine garb as a matter of personal internal expression – the homosexual 'Queen' does so for external effect – to attract males for sexual purposes and to ease the guilt of both." However in conversation Prince, while denying finding men attractive, did admit to enjoying being attractive to and flirting with men. She had a cross-dresser friend who was willing to play the male role and took her for lunch and drinks. Afterward they did mutual masturbation. She found kissing, hugging and affection from a man to be sexually rewarding. Hence we could take the attitude that by her own definition we can take her as a homosexual queen. The fashion in typology has changed since the sixties. Then the emphasis was on behavior; now it is on sex or gender identity. Prince did emphatically reject a gay identity, but if a police officer had encountered Prince and her date they could have been convicted. She insisted that "never once was there any kind of anal or oral sex". There is of course a significant minority of gay men have the same preference, but with a different sexual identity. Suzan Cooke says that she spoke to a male hustler who counted Prince among his customers. That is certainly possible but we need further confirmation.

Like the later HBS movement, Prince would use 'gender' where the context would imply that she meant 'gender identity'. And of course there is something a bit askew about Prince's gender identity. Even as late as the 2000s she insisted that she was heterosexual. It seems that she never accepted the argument that as a heterosexual woman she should be interested in men. Likewise she kept repeating that she was a pioneer of men's lib. If she were a women with a woman's gender identity then of course she would not be a pioneer of men's lib.

If Muriel were born not in 1912, but in say 1992, where would she be today? Would she have been a transkid on puberty blockers, and completing surgical transition in a gap year before going up to university? Or would she join those who say that it is a violation of the UN statutes against torture to compel trans persons to be sterilized? In none of the source documents is there an explanation of why Prince turned away from wanting surgery.

One can see why Yvonne Cook-Riley and Kimberleigh Richards wanted to credit Prince with something that she never did, and never could have. It is an irony of note that Diane Kearny, Suzan Cooke, Jenifer Usher and Cathryn Platine all want to support Cook-Riley and Richards in this endeavor.
Time: 22:36