Lem Clemmensen, was a lecturer at the University of Toronto and Coordinator at the Clarke Institute (later the Centre for Addiction and Mental Health) Gender Identity Clinic, where he often was the one who was more sympathetic to the trans patients.  His 1986 masters thesis was Male gender dysphoria and criminality.

He was married to a woman, and they had two children. In 1991 Lem transitioned as Maxine, while still working at the Gender Identity Clinic where she was her own supervisor. Michael Bailey says that after transition she never saw her children again. 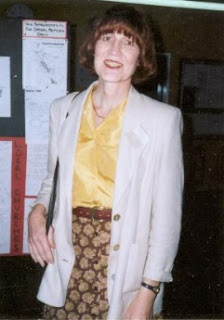 Maxine is quoted in Bailey’s The Man who Would be Queen as saying: “Most gender patients lie” and this one quote has been repeated extensively. She was part of the committee that revised the Standards of Care in 1998.

In 2000, she and Robert Dickey denied Synthia Kavanagh approval for SRS in that, being in prison, she could not do a Real Life Test. In the same year they were quoted in Vivian Namaste’s book defending the requirement that a trans person should do a year’s Real Life Test before starting hormones, and as critical of activists demanding hormones and surgery as a right. In September 2003 Maxine testified at an Ontario Human Rights Tribunal that government funding should be re-instated for SRS.

In November 2003 she resigned from HBIGDA (Harry Benjamin International Gender Dysphoria Association, now WPATH) when her boss Ray Blanchard did because it criticized Bailey’s book, an act which she described as ‘political correctness’.

She now lists her name as Maxine Petersen-Lee and offers private counselling.

I do not normally categorize persons discussed here as HSTS or autogynephilic, but as a loyal associate of Ray Blanchard, Petersen presumably endorses his binary, and as a father and ex-husband, that would make her Autogynephilic. She has not clarified whether she regards herself as such.

Unlike the Vancouver, Stanford, Charing Cross and Monash gender clinics, and unlike the Gender Recognition Panel, and the Free University in Amsterdam, the CAMH actually has a transsexual staff member.

In Vivian Namaste’s book, Petersen is not identified as trans, as per Namaste’s usual practice.  This makes her book an open text in that many of her readers know about Petersen from other sources.
Time: 06:03