The greatest artist of the 20th century

One of the most colourful figures in the scene around transgender persons is the Marquis of Pubol, Salvador Domingo Felipe Jacinto Dalí Domènech, best known as Savador Dalí. The artist and filmmaker.

His 1929 film with Louis Buñuel, Un Chien Andalou, contains a character described as a 'hermaphrodite'.

He offered to do a painting of April Ashley as Hermaphroditos but she did not want to immortalized in her half-way status.

From the 1960s he was and remained a friend and mentor of Amanda Lear, and rumours say that he paid for her operation with Dr Burou in Casablanca in 1963. She lived with him and his wife for many years. Some say that her name = ‘a man’ + ‘dali’ or "L’amant Dali”.

In 1965 Mario Montez the New York underground film female impersonator made his iconic Andy Warhol film, Screen test Number 2. the one where he confronted about his gender and admits that he is a man, but he does so, he says, only because he is a woman. Savador Dalí was present and is in the film.

In the late 1970s he trained Manuela Trasobares Haro (who had transitioned at the age of 15) as an artist.

Also in the 1970s had his own set in New York.   Most famously he was a friend of International Chrysis, the New York drag celebrity, best known for her role in Sidney Lumet's 1990 film Q & A.  He appears in the 1992 documentary film about her life, Split: William to Chrysis: Portrait of a Drag Queen.

Anthony Haden-Guest describes the scene.  Potassa de la Fayette "was often part of the entourage of Salvador Dalí. If any 'ism' ruled in Studio, it was voyeurism. Most went to see or be seen. Dalí, a veteran of the human gaze, would go with people he needed to impress. A man who liked a hectic sort of order, he would follow a routine, dining first —Trader Vic’s was a favorite spot—with his considerable retinue of regulars before going on to the club. 'There were always three or four transvestites,' says Roger de Cabrol, a designer and regular himself. “Potassa. There was
this French transvestite, very pretty, named Pascale."

Dalí was also seen at the GG Barnum Room with Ava Hollywood. 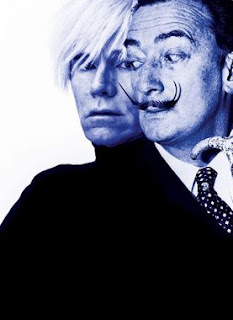 In the late 1970s, Dalí was close to the Brazilian 'trans diva', Yeda Brown. He introduced her to musicians and the press called her ‘the muse of Dalí’.