Unlike some of the persons whom I have featured in this series, Angela Douglas had, before her recent death, been recently posting on the web, and has a new CD out. The last item may surprise those who have read the account of Angela Douglas either on Kay Brown's now defunct Transsexual, Transgender and Intersex History site, or in Joanne Meyerowitz: How Sex Changed: A History of Transsexuality in the United States, neither of which mentions her musical career.

As an exercise, I am going to write a sketch of Douglas taking facts only from Brown and Mayerowitz, and then again from Douglas' web postings. The two versions are radically different.

Brown and Mayerowitz version:
Born: Carl Czinki. A hippie and aspiring rock musician who came out as transgender in 1969. She became the radical transy leader in Transsexual Action Organization (TAO)--the major US transgender group other than Reed Erickson's EEF at that time-- in Los Angeles in the early 1970s, and then in Florida. She emphasized the importance of working with both Women's Liberation and Gay Liberation groups. She deplored the medical model and pathologization of transgenderism, and called on the American Psychiatric Association to remove transsexuality from its list of mental disorders. She was antagonistic to the Erickson Education Foundation which she found patronizing and too close to the medical establishment. Satire that Douglas wrote about the exclusion of transies from the lesbian community was recycled misleadingly and out of context by Janice Raymond in The Transsexual Empire, and also by Catherine Millots in Horsex. She later won a lottery prize, obtained surgery, and moved back to Florida. 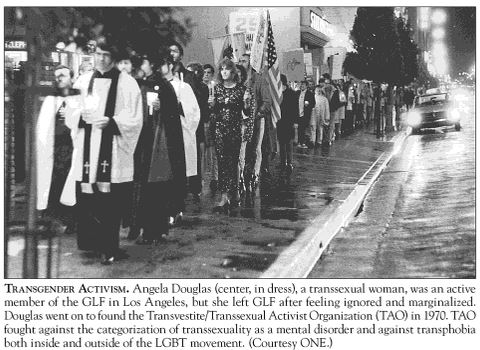 The contentious writing quoted in Raymond and Millots was originally published in Sister Aug-Sep 1977, p7. As quoted by Raymond p xvii it goes: "Free from the chains of menstruation and child-bearing, transsexual women are obviously far superior to Gennys in many ways .... Genetic women are becoming quite obsolete, which is obvious, and the future belongs to transsexual women. We know this and, and perhaps some of you suspect it. All you have left is your 'ability' to bear children, and in a world which will groan to feed 6 billion by the year 2000, that's a negative asset."


From Douglas's own postings we get a certainly different slant:


Born: Douglas Carl Czinki in Detroit in 1943 to Hungarian immigrants. Raised on US Air Force bases. He completed his education in Tokyo where he was in his first rock band. Served in the US Air Force. In the late 1960s, using the name Doug Delain, he briefly played guitar with Arthur Lee and Love, with Euphoria and then with Warren Zevon. He had a cameo as a pot smoker and did art work for the 1967 film The Trip. Provided his home for a Jimi Hendrix television special. His Cuban wife left him in 1967. Began transition in 1969. She ran TAO which had over 1000 members in 5 countries. She was frequently attacked, and was beaten unconscious 6 times. She dismisses the idea that the letter sent to Sister was satire, and has made comments that are homophobic, misogynist and anti-feminist. She has been an FBI informant since 1972. She had surgery courtesy of John Brown in 1977, which left her mutilated. She helped to get him arrested. She dissolved TAO in 1978. Douglas has lived as a man since 1982, homeless and celibate, except for two years after winning a lottery in 1991. The money ran out when he had a stroke. He also has diabetes. In 1998 he returned to performing as a man, Last Drop Douglas, and and issued a solo CD, Cosmo Alley, in 2003.

Here is an obituary by Mark Hinson in the Tallahassee Democrat on August 24, 2007. It is no longer available on the original site:

Douglas, who lived in Sneads in Jackson County, died of complications from heart trouble earlier this month. She was 64. As she said in one of her last communiqués: "I am 64 and Paul McCartney doesn't care."
In the above photo are Stuttering John, left, from "The Howard Stern Show" and, right, Angela Douglas. The picture was taken in Panama City Beach, circa 2000.

When I was a young reporter in the '80s, Douglas used to phone me in the newsroom of the Tallahassee Democrat and launch into wild, rambling monologues that were part performance art and part paranoid fantasy. She was always convinced someone had stolen her life story.
When "Top Gun" became a monster box-office smash in 1986, Douglas wanted to sue Tom Cruise for pilfering her self-published autobiography "Triple Jeopardy" from 1982. (I don't remember many trannies flying fighter jets in that pic, unless Goose wasn't telling us something, do you?) Famous musicians such as Warren Zevon, she claimed, had stolen her songs without payment.
Mostly, I just let her vent. As I learned long ago in bartending class, you let the customer talk while you just wipe the bar with a rag and keep saying, "Yep, I know what you mean."
Getting flaky phone calls in a newsroom is nothing new. For a few months, a caller identifying himself as God would phone up to predict the day's weather. And, you know, most of the time he was more accurate than the professional meteorologists we paid to do the same job. (God says it's going to be hot this weekend, by the way.)
I was prepared to write Angela off as just another kook. But then I did a little research and found out she really had worked on the fringes of the music and movies industries in Los Angeles during the '60s and early '70s. She'd worked with Arthur Lee before he formed Love and really did know Zevon (in his starving-artist days). Jimi Hendrix may or may not have recorded one promo at her home in L.A. That house was also used as a set for Roger Corman's 1967 acid-dropping classic "The Trip" with Peter Fonda and Dennis Hopper.

Douglas started life as Carl Czinki - and played guitar under the name Doug Delain in the L.A. band called Euphoria - but decided to switch sexes in 1969. The transformation was complete by 1977, when Douglas had become an outspoken writer/journalist for the transgender community. This is the same time period she became convinced television and movie producers were stealing her life story.
I have no idea how or why Douglas ended up in rural Jackson County in the late '80s.She settled in dinky Grand Ridge near Sneads and lived in impoverished conditions. This made her very bitter and she often lashed out at gays and blacks when she called me with another rant.
When her phone calls from pay phones suddenly stopped, they were replaced by a stream of letters. I still have stacks of the things. Some are coherent, some are funny, some are hand-scrawled screeds that are impossible to read.
Then, in the summer of 1991, Douglas had a rare stroke of good fortune. She won $232,567 in the Fantasy Five lottery game. After taxes, the lottery cut her a check for $186,000.
In a newsletter published by the lottery, Douglas crowed that she was going to buy an electric guitar, a used red Corvette, tell everyone in Grand Ridge to kiss her you-know-what and move to Key West.
And that is exactly what she did.
A few months later, she was back in Jackson County living in poverty. Again. She'd found plenty of friends in Key West who were more than happy to help her spend her free money.

Occasionally, I'd get good news from Douglas. In 1997, she wrote a twisted little novelty song called "Andrew Cunanan" and it end up on Dr. Demento's nationally syndicated radio show. (She also penned parody tunes with titles such as "Ghost Eunuchs in the Sky.") In 2003, she released a CD called "Cosmo Alley" under the name Last Drop Douglas. She even played a few live shows at festivals around North Florida and drove to Panama City to meet Stuttering John from Howard Stern's radio show. Douglas both loved and hated Howard Stern.

Most of the Douglas letters, however, were depressing. Naturally, the FBI was after her. She railed against doctors (many of whom I knew personally in Marianna) who were allegedly conspiring against her by denying her treatment. Her surgery from the '60s and '70s had left her with many medical complications, which she discussed at length and I won't repeat. It wasn't pretty, I'll tell you that. I hope sexual-reassingment surgery has gotten a little better since the '60s.

Earlier this year, Douglas sent me a tape she'd recorded while she was in the hospital. It starts with the chilling intro: "This Angela Douglas and I am dying." The rest of the message is classic Douglas - nutty accusations, bold claims, too much personal information about her medical conditions, crazy tales of her musical past. All classic Angela.
As I listened to the tape, it suddenly dawned on me: "Hey, her life story really would make for an interesting movie or play. Wonder why anyone hasn't done it before?"

PS The British actress Angela Douglas, whose first fame was in several Carry On films, is a different person.

PPS Kay Brown's page includes stories, "probably apocryphal" she says, about Douglas as a transactivist at the 1968 Democratic National Convention in Chicago, and at the Stonewall riot in 1969. These do seem implausible, and in writing the above, I have ignored them.

There was a British branch of TAO. Amazingly Stephen Whittle was involved in it. For details see p192-3 of Ekins & King The Transgender Phenomenon, 2006.

I certainly agree that someone should write a book about Angela Douglas and TAO.