Walter Faw Cannon was born in North Carolina to a line of Methodist divines. His father was a former Dean of the Divinity School at Duke University. Walter escaped to Princeton University at the precocious age of 16. His physics degree was interrupted by war service in the US Navy.

Both at university and in the Navy, he considered himself to be a 'male woman' and was used sexually by 'straight' men. He had a severe stammer, but compensated for this and became a major debater.

Walter did a PhD at Harvard in the history of science, 'On uniformity and progression in early Victorian cosmography', and then held various university teaching positions in the subject.

In the 1950s he had a relationship with a lesbian friend who would screen men for him to see. They planned a marriage so that they could have children, but in the end they did not go through with it.

In 1962, Cannon joined the Smithsonian Institute where he would spend the rest of his professional life. His academic specialty was science in the Victorian period. He was active in poetry groups and his poems were published a few times in anthologies.

In the 1970s he also joined a transvestite social group. His mother died in 1974, and his lesbian friend in 1975. Little by little he changed his dress, first by carrying a purse, and then eventually he was a tall, balding, broad shouldered man in a skirt. 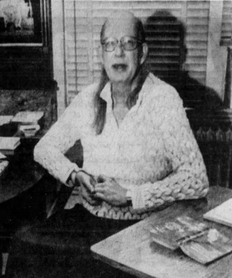 In 1976 Cannon legally changed her name to Susan Faye, and insisted on being called this at work. She was interviewed in May 1977 by The Washington Post and defined herself as a 'male woman'. 'I feel I'm dressing up as a clown when I wear men's clothes'.

Her major book is Science in culture: the Early Victorian Period, 1978, which was published as by Susan Faye Cannon. It won a major prize from the History of Science Society. However, her work situation deteriorated and there was growing pressure to get rid of her. In 1979 she came to a deal with the Smithsonian, and retired.

By now she was taking hormones, and had decided to have a sex-change. However she was 55 years old, had arthritis in her back, trouble with her eyes and stomach problems. She was a chain-smoker and addicted to painkillers. She was declared a recovered alcoholic after a session in a clinic. Susan had gender surgery with Dr Biber, at age 55, but never really recovered. Her intake of painkillers escalated, and a year later she was found dead, probably from overdoses of painkiller.