The front cover of this book says that it is by Violet Grey, but both Amazon and her own publisher, CompletelyNovel, say that the author is Rose White.  Rose has also used the pseudonym Fleur Black.  There is an obvious pattern here of a flower word with a colour word.  Readers of Grey, White and Black will quickly notice that all three have the same stylistic quirks, of which the most obvious is that Grey, White and Black – and nobody else – all write ‘autogyne’ instead of ‘autogynephile’.  Here is Rose using it, and here is Fleur.  The book quotes White and Black as if they are different persons from the author, assumed to be Grey.

Fleur Black went through a phase of posting comments on Women Born Transsexual in March 2009.  Here is a sort of autobiography:


I was crossdressing at 6/7 but by 8 I knew I had to hide it ..until at 14 I wrote to Doctor asking him to cure me to be a proper boy because that's what everyone seemed to think I was and by then my body had gone really male…doctor brought letter to speak to mother, he ran out of house rather than speak to me when I arrived home from school..no-one said anything about it so a couple of days later I swallowed the aspirins and made a mess all over the bathroom…buried it basically but of course we everyone constantly reminded me that I was displaying feminine behaviour..finally at FIFTY SEVEN it was do or die time…now 4.5 years later I hope I’m less than a year off surgery…but if the shrink in April says no SRS then I will have nothing left to live for even though I'm fully out and transitioned all legal right up to just needing SRS so I can try get a bit of a proper life for my last years…my mother is almost 90 and lots of relatives lived into 80s so basically i could have a few good years…just hope so.  [a few spellings corrected]. 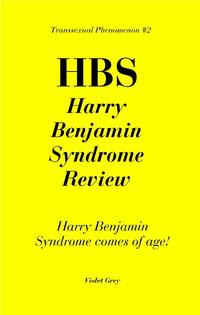 Here Rose writes about her trip to Tunisia for breast augmentation.  She is active in the Charlotte Goiar HBS group.  While she has had her Gender Recognition Certificate for some time, she is encountering difficulties in getting surgery under the NHS.  Rose nor Fleur nor Violet say anything at all about what they did between the ages of 14 and 57.

You can read the entire book online.

Charlotte Goiar has put a link to the book on the HBS International (English) site, but only to the PayLoadz site where you can pay for it without seeing it.  There is no link to the CompletelyNovel site.  Nor is it admitted that Violet Grey is Rose White.

Actually, CompletelyNovel give the book's title as Harry Benjamin Syndrome Review, but internally the title is given as Transsexual Phenomenon #2: HBS: Harry Benjamin’s Syndrome comes of age.

While the book is claiming to be a successor to Harry Benjamin’s Transsexual Phenomenon, there are no footnotes, no bibliography and no index.  Internal citations to other publications are usually either wrong or inadequate, and she freely replaces ‘transsexual’ with ‘HBS’ in quotations from others without editorial brackets and without clarity that she is doing so.  A very serious defect is that the page numbers given on the contents page are plain wrong: e.g Chapter 6 is said to be on p37, but it actually starts on p44.
The first 18 chapter comprise 108 pages, and each make a short point.  Chapter 19 alone is another 108 pages, and rambles and rants.  I suspect that many readers will skip the last chapter.

Jargon.  In addition to ‘HBS’ which is unquestioned here (as you would expect from the book’s two titles), there are other usages which need to be explained. Fortunately she devotes chapter 2 to how she uses some of the words.
White-Black-Grey also has some personal usages that need to be spelt out.
Some of her points:
Of course there is not the slightest evidence for any of this.  It is simply asserted.
Conclusions