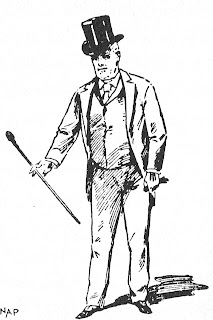 Luisa Matson grew up to become businessman Milton Matson. After 25 years of being Milton, he was arrested in 1895 in the rooms of his fiancée, Helen Fairweather, a school-teacher in Los Gatos, California for endorsing checks made out to Luisa.

He was locked up with several other men in the County Jail in San Jose for two weeks until a telegraph arrived for Luisa Matson. This created confusion and after legal wrangling, the charges were dropped, and he was free to leave, still in male clothing.

While the press was debating whether he would be re-arrested under the local law against cross-dressing, he was offered a position in a local dime museum to exhibit himself in male clothing. He stressed that he found women's clothing so completely uncomfortable. The show was so successful that a few other local freak shows also introduced a male impersonator. He later appeared in the public library as S. B. Matson.

He continued his friendship with Miss Fairweather, but they never did marry. He lost his job and home in the earthquake of 1906. He relocated to Point Lobos. His sex was ‘rediscovered’ when he died of a stroke.

Email ThisBlogThis!Share to TwitterShare to FacebookShare to Pinterest
Labels: circus