Ulrichs was born and raised in Aurich, Hanover. His father died when he was 10. He later recalled that as a young child he wore girls’ clothes, played with girls and wanted to be one. His first sexual experience was at age 14 with his riding instructor. 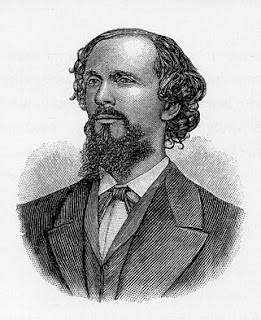 He studied law and theology in Göttingen and history in Berlin. His dissertation, in Latin, was on the Peace of Westphalia. From 1849 to 1857 he was a legal advisor for the district court of Hilesheim in Hanover. He was fired for being gay. He then worked as a reporter for the Allgemeine Zeitung, and lived off a small inheritance.

Under the pseudonym of Numa Numantius, he wrote a series of booklets in the 1860s proposing that homosexuality is natural and biologically based. He describes himself as an Urning, and used Dioning for males attracted to females. He proposed that Urnings are anima muliebris virili corpore inclusa (a female psyche confined in a male body), a metaphor that would be applied to trans persons in later generations.

He then wrote more under his own name, and pleaded at the Congress of German Jurists in Munich for a repeal of the anti-homosexual laws. His books were banned and confiscated in Saxony, in Berlin and throughout Prussia.

As a patriotic Hannoverian he was briefly imprisoned after the Prussian Anschluss in 1866. The next year he left Hannover for good. He lived in in Munich, Wurzburg and Stuttgart, and then from 1879 he lived in Italy, where he finally settled in L’Aquila. He continued to publish in German and Latin at his own expense.

In 1884 he wrote the first gay vampire story, “manor” in in his collection, Matrosengeschichten (Sailor Stories).

There are now streets named for him in Munich, Bremen and Hanover. His birthday is marked each year by a poetry reading at Karl-Heinrich-Ulrichs-Platz in Munich. There is an annual pilgrimage to his grave in L’Aquila. The International Lesbian and Gay Law Association presented a Karl Heinrich Ulrichs Award in 2005 and 2009.