We looked at Raphael once before. Zir Angel’s Dictionary is well worth revisiting for the obscure and arcane words revived. Here we will look at some of the words and how they have fared in the years since 1996.

Arenotelicon. Presumably from Arreno (Attic Greek for male) and Telicon (Greek for distance or achievement). The word is found in a Renaissance book, the Physiologus where it is used to describe hyenas who were then believed to change sex each year. Carter suggests that the word would apply well to the Gethenians in Ursula LeGuin’s The Left Hand of Darkness. The word means distancing oneself from maleness, but what would be distancing oneself from femaleness: Thelyotelicon? Arenotelicon has been picked up in SF gaming. Elder Scrolls: Arenotelicon? “Pretty easy: ‘a creature that alternates between male and female’. Why not just ‘phase-shifting tranny’? Well, because sometimes the old words are best, as they ring with implied importance and are all long and spooky-looking.”

Arenotelicon is also sometimes just as a hyena/wolf type monster without any sex-changing – in this usage it was the inspiration for the film Brotherhood of the Wolf.

Baeddel. An old English term for a trans woman. Urban Dictionary says that it is a derogatory term, but any term from that period would have been. Is it connected to our modern word ‘bad’? Some have reclaimed the term for themselves. Some of those who did that have acquired a bad reputation for online aggression, especially against trans men. However not all.

Epicene. From the Greek epi + koinos (common). So by usage: what is common to both genders. Non-binary pronouns are epicene pronouns. Carter comments: “This word has taken on a variety figurative meanings over the centuries (Ben Jonson used it to mean something like 'effeminate'); still, more than any other word I know of, it emphasizes what is common to both sexes. Its Greek root means 'common,' and it shows up in descriptions of garments that either sex can wear, or places both sexes dwell ('Epicene...Convents, wherein Monks and Nuns lived together.' -- Fuller, c.1661).” Zir offers a meditation on why zir prefers ‘epicine’ to describe zirself, rather than androgyne or any other term. A position that I find to be quite coherent.

However. Yes, most definitions support Carter’s usage. However let us look at a couple of usages: Evelyn Waugh in Brideshead Revisited: “He was magically beautiful, with that epicene quality which in extreme youth sings aloud for love and withers at the first cold wind.” Graham Greene in The Confidential Agent: “The little room swung clearly back – the boot cupboard and the epicene girls in black silk stockings and the masculine chairs.” (These two examples from Tom McMorrow in Having Fun with Words of Wit and Wisdom). Then there is the usage, not in the novel The Silence of the Lambs, but is its exegesis, of describing Hannibal Lecter as epicene. Camille Paglia in Sexual Personae, using ‘epicoene’, the 16th century spelling, gives the examples of George Villiers, Byron, Elvis Presley and Michelangelo’s statue, Giuliani de’ Medici. Molly Haskell, in her From Reverence to Rape: The Treatment if Women in the Movies, uses ‘epicene’ to describe the screen personae of Oliver Hardy and Clifton Webb. What is this other ‘epicene’ that is not some type of gender variance? Most dictionaries avoid it, strangely – given their remit to reflect usage. Let us look at The Columbia Guide to Standard American English, where the definition starts with “Etymologically, epicene has had overtones of effeminacy, even decadence”. Such of course is Lecter. Let us also note the following word in the Columbia: epicurean “a person who has a well-developed taste for and an enjoyment of good food and drink”. Even more so is Lecter. It is almost as if there has been a seepage of meaning between two words adjacent in a dictionary.

Salmacian. A term proposed by Raphael for male-to-intersex and female-to-intersex transsexuals. Salmacis was the other person conjoined with Hermaphroditus in Ovid’s Metamorphoses. The definition has been revised by some to “people who wish to have a mixed genital set” in that intersex is not a condition that can be acquired by surgery. The Intersex Glossary proposes ‘bigenital’ as “a less common and potentially more controversial synonym”. The same source defines Salmacian: “A dyadic person who wishes to transition to a sexually neutral or ambiguous state. Some see salmacianism as fetishistic, arguing that it conceptualises intersex as one set of sexual organs universal to all intersex people, or that salmacians are co-opting the intersex experience. Salmacians themselves simply see themselves as being happier with some form of non-normative genital configuration, androgynous body shape, etc., and it is the author’s opinion that their wishes for transition should be respected.” The best known surgical Salmacian would seem to be Les Nichols, although there is no statement that he identified with the word.

Wiktionary gives scatta as a form of the Italian scattare, to be released – which is appropriate in that most trans persons experience release in transition. Urban Dictionary defines it as a ‘bitch fight’.


Waepenwifestre. According to the Concise Anglo-Saxon Dictionary, Weapenlic meant unruly or male. In modern English, ‘weapon’ has narrowed to a tool for killing or harming others, and so ‘Waepenwifestre’ for trans is extremely unlikely to catch on. 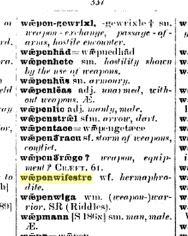