Annadurai was born the son of a owner of a milk delivery lorry in Namakkal, Tamil Nadu, India (map). In love with a fellow male student, he failed his school exams and dropped out. His parents gave him a male job cleaning the lorry. But he was also subject to anti-hijra taunts.

He met other hijra and started growing his hair. His brother beat him almost unconscious with a cricket bat, and then he was dragged to the local temple where his head was shaved. 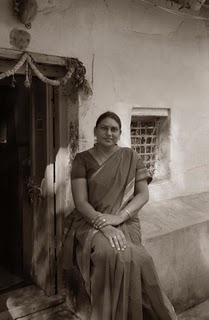 After three months Revathi started wearing a sari, and went to Delhi where she found a guru with whom she would beg. Then she moved to Mumbai and became a sex worker.  After her nirvanam (gender surgery), her family accepted that this what she was doing. In Bangalore she was stripped and beaten for two days in a police station, and then forced to clean the station floor. Her guru, Manjulam, was murdered by extortionists at the age of 58.


As a guru in turn, Revathi often refused a cut of her chela’s earnings. One of her chelas introduced her to the Bangalore-based NGO Sangama. Revathi spoke at the World Social Forum in Mumbai, 2003, where she also married a fellow activist, but he left her a year later because she was not subservient.

With the encouragement of a board member of Sangama, Revathi travelled across Tamil Nadu for a year meeting 37 hijras and documenting their experiences. She organized sexual minority rights rallies, and educated hijra sex workers about their rights.

Since the publication of her book she has been living with her parents, now aged invalids, and is their sole caregiver and financial support. She is working on a project of listing all 3 lakh (3,00,000) hijras in south India to make their community more real. However she was then then forced back into sex work because of a lack of other income. However Penguin Books has commissioned an autobiography, and Sangama has found a position for her in Mysore where she will not need to meet her ex-husband.