Woollcott was raised near Red Bank, New Jersey, in a rambling house that had been a utopian community.. His family were avid readers. Alexander was a pampered child whose sisters frequently dressed him as a girl.

At Hamilton College, Clinton, New York, he edited the student literary magazine and founded a dramatic club where he insisted on playing all the female leads. He frequently appeared at parties in female dress, and gave out calling cards that read ‘Alexandra Woollcott’. 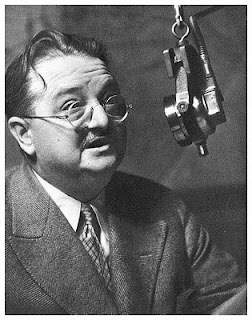 He became a drama critic for The New York Times, and was banned by the Shubert Theatre which did not like his reviews. He sued but lost in 1916 on the grounds that the New York Civil Rights Act forbade discrimination on the basis of race, creed or color only. From 1929-34 he had a column in The New Yorker.

He started on CBS radio in 1929 reviewing books, and had a regular show from 1933-8, The Town Crier, where he pushed his own book, While Rome Burns, 1934. He acted a little and co-wrote two Broadway plays. He was a member of the Algonquin Round Table with Dorothy Parker and Robert Benchley. He was a friend of Harpo Marx.

He was the inspiration for Sheridan Whiteside, the main character in George Kaufman & Moss Hart’s The Man Who Came to Dinner, filmed 1942, and for Waldo Lydecker in the film Laura, 1944.

Even after achieving fame as a journalist and theatre critic, and becoming fat, he often appeared to his house guests in vast flowing dressing gowns with huge wide-brimmed hats. He also made money designing women's clothing.

He died during a live radio show where he was part of a panel.